Consider water running from a tap to illustrate the two states. When the tap is turned on just a small amount, water flows straight down in a very well-behaved and predictable stream as shown in (a) of Figure 3.15. The more the flow increases the more turbulent the water flow becomes. The surface of the water creates waves as shown in (b). 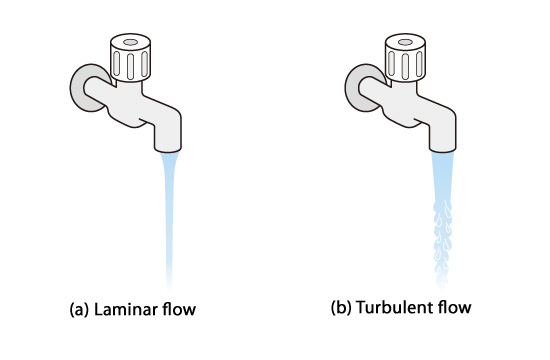 Figure 3.15: Water running from a tap


In 1883, a British scientist named Osborne Reynolds (1842-1912) classified flows as either laminar or turbulent from a series of experiments known as the Reynolds’ experiment. In the experiment, flows were visualized by pouring a stream of ink into a pipe in which water flows. The result showed that, when the water velocity was low, the ink moved downstream in a continuous straight line as shown in (a) of Figure 3.16. In this case, the flow was laminar. However, when the water velocity was high, the ink started in a straight line but began oscillating and quickly dispersed throughout the pipe. This flow was turbulent. 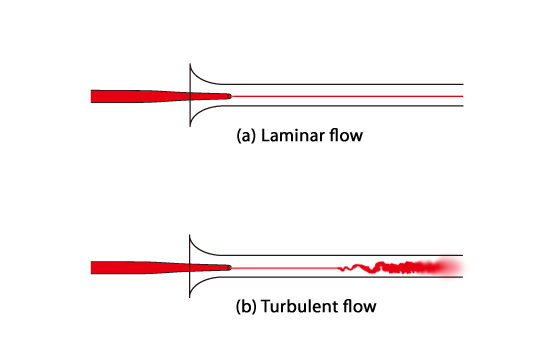 
In the experiment, Reynolds discovered a dimensionless number could be used to classify flows as either laminar or turbulent. This number is called the Reynolds number. The Reynolds number Re is defined by the following equation:

L: Characteristic length
(In this example, L is the inside diameter of the pipe)
U: Representative velocity
(Here, it is the average velocity of the flow passing through a cross-section of the pipe)
ρ : Fluid density
μ: Viscosity coefficient

Consider another example. Suppose you want to simulate the air flow around an automobile moving at a speed of 50 km/h by using a half-size model in a wind tunnel as shown in Figure 3.17. The equation for the Reynolds number says the air velocity should be 100 km/h since the characteristic length has been cut in half to maintain a constant Reynolds number. 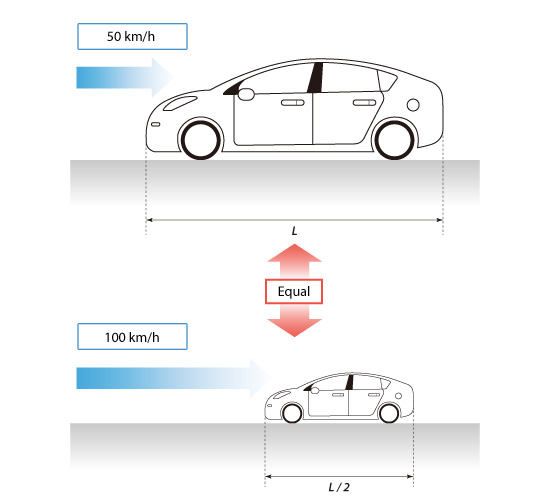 The range of Reynolds number for the transition from laminar to turbulent flow in a pipe is generally 2,000 to 4,000. These values are just approximated and the actual values will vary depending on the state or conditions of the flow. 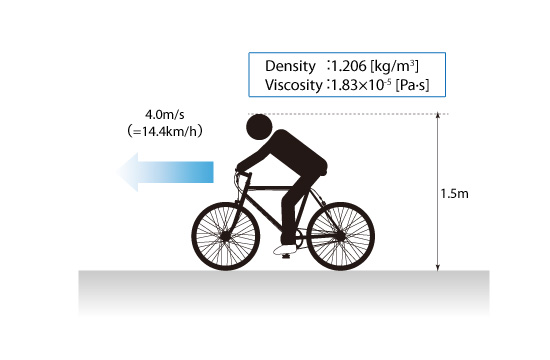 Figure 3.18: Person riding on a bicycle


The Reynolds number is calculated using the following equation for the flow of air.

The calculated value for the Reynolds number is 400,000, far greater than the aforementioned approximate value of 2,000 - 4,000 denoting the conditions when the flow transitions from laminar to turbulent. We find that the majority of flows observed in our daily lives is turbulent.

A turbulent flow can be either an advantage or disadvantage. A turbulent flow increases the amount of air resistance and noise; however, a turbulent flow also accelerates heat conduction and thermal mixing. Therefore, understanding, handling, and controlling turbulent flows can be crucial for successful product design.