Mr. Toshikazu Nozawa, the Research Associate at the Tohoku Institute of Technology (Picture 1), has been investigating wind minimization and power-generating wind turbines. Both are possible alternatives for windbreak trees lost in the tsunami that struck northeastern Japan in 2011. Here, Mr. Nozawa explains his research pursuits and his use of CFD (Computational Fluid Dynamics) in his work. 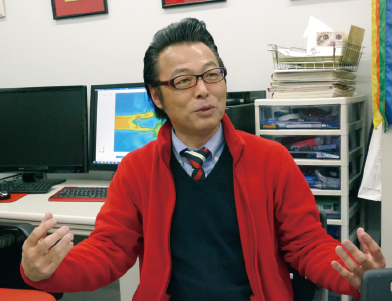 
A considerable number of windbreak trees were lost when the deadly tsunami struck northeastern Japan in 2011. Although replanting is in progress, it will take dozens of years for the trees to fully grow and properly function as windbreaks. Meanwhile, local people, who reside by the coast, are exposed to the strong winds from the sea without any filters or shields. Excessively strong winds can be a natural hazard and cause damage to buildings and crops.

Mr. Nozawa has been investigating whether wind turbines can assume the role of the lost windbreaks. He proposes using a wind turbine that reduces the wind velocity to one tenth of the incoming wind speed, and reduces the corresponding pressure one hundredth the incoming value, as an alternative to windbreaks. The wind turbine can also generate electricity. Mr. Nozawa is currently experimenting with a prototype turbine in collaboration with local enterprises. The goal is to re-establish the windbreak environment in Arahama in Sendai, his hometown in northeastern Japan, which is close to the sea. 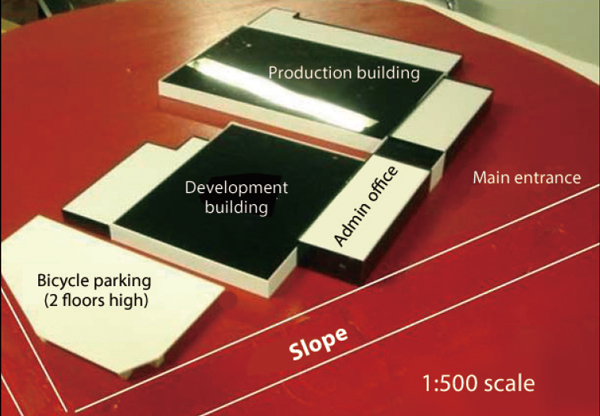 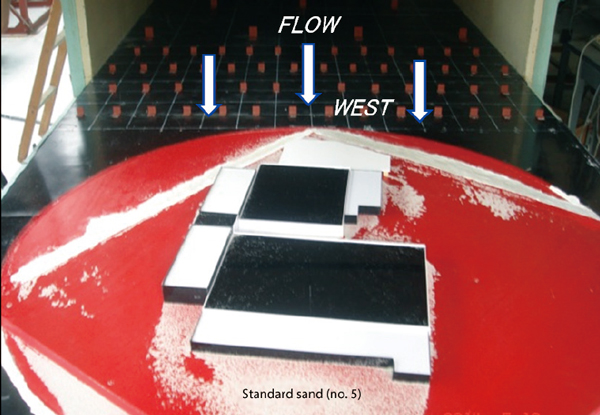 
Tokyo Electron Miyagi Limited has installed the wind turbine proposed by Mr. Nozawa to solve the problem of strong winds. The wind, which can blow as high as 10 m/s, blew off the main gate at a facility and blew down a staff. The story of Mr. Nozawa’s turbine and the experiments at Arahama drew their attention. Tokyo Electron Miyagi now has ten of Mr. Nozawa's turbines operating (Fig 1-3).

Mr. Nozawa's interest in wind turbine research is linked to his earlier studies. Mr. Nozawa was originally a researcher in architectural and structural engineering, rather than mechanical or fluid engineering, and was involved in investigations of building damage caused by typhoons, tornadoes, and other strong winds. As he produced yearly damage reports, he noticed a similarity between the buildings that were damaged by strong winds. 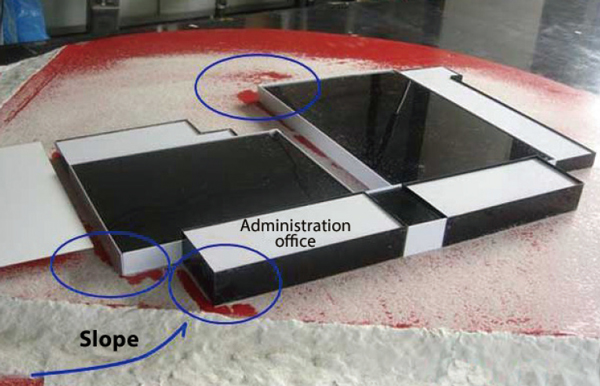 
“The area that is likely to be especially damaged is where the wind velocity (wind pressure) becomes greater. I thought that damages could be reduced if we implemented equipment that weakened the wind in the particular spot where the wind was strongest. Back around 2003, I saw that small power generating wind turbines were beginning to become popular. I thought 'why not kill two birds with one stone?' by implementing wind turbines which can weaken winds and generate power at the same time,” explains Mr. Nozawa.

However, Mr. Nozawa was confronted by two problems: noise and visual design caused by the turbine propeller, which was typical of the time. To solve these, Mr. Nozawa began development of straight wing vertical axis wind turbines. The design was based on the Darrieus wind turbine. Initial experimental results showed only a 20% power generating efficiency, but the efficiency to weaken the wind strength proved quite high. “At that time, my priority was shifted to weakening the wind rather than power generation. I thought this could help people around the world who suffer the negative effects of excessively strong winds,” says Mr. Nozawa. 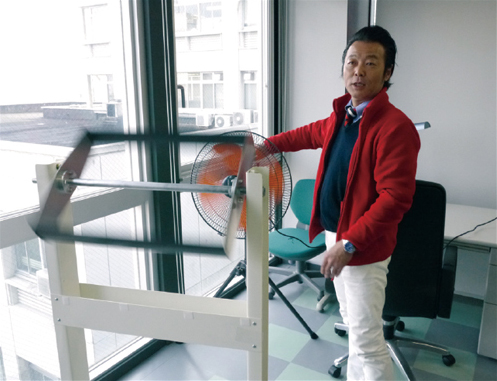 
Mr. Nozawa asked questions to users of small power generating wind turbines to find out whether a demand to weaken winds really existed. He learned that many were facing problems with strong winds. Convinced that the topic is worth exploring, Mr. Nozawa turned to further investigation.

“The concept of weakening the wind, in other words, weakening the external force, is not well accepted. Improving the endurance (strength) of structures to withstand strong winds has always been the common approach,” says Mr. Nozawa. He considered that the common approach may not be the best solution for wind problems surrounding old or damaged buildings in hazard-stricken areas. Perhaps his idea was better. That inspiration led to the experiments in Arahama to validate the performance of his wind turbine design. 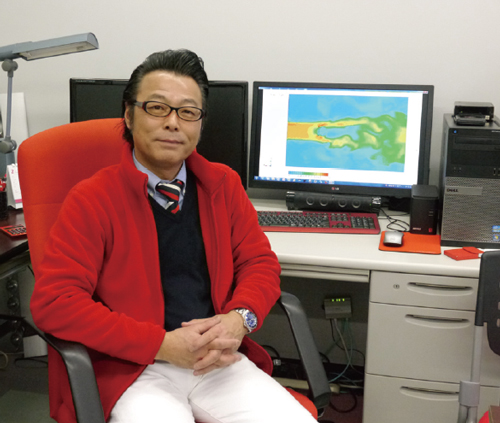 
The Relationship between CFD and Experiments

Mr. Nozawa uses CFD simulations during the research and development of his wind turbines. Using simulations, he can validate the effects of phenomenon that cannot be tested in experiments. For example, this includes adding anemometers inside turbines. “Simulations are helpful in a number of ways. We can check the flow qualitatively before wind tunnel experiments. CFD helps us understand the factors that cannot be clearly identified in the actual experiments” says Mr. Nozawa.

“From the experience, I now think that it is best to apply CFD simulations when evaluating ‘what is missing’ and ‘what are the important parameters.’ Boundary conditions and parameters can be adjusted one by one,” says Mr. Nozawa.

In this research, Mr. Nozawa uses CFD simulations to understand how the wind turbine weakens the strength of the wind. In fluid engineering, many phenomena are yet to be fully analyzed. According to Mr. Nozawa, weakening the wind by using wind turbines is one of them.

As Mr. Nozawa is essentially an experimentalist, he first considered CFD simulations as a means of estimating results prior to conducting experiments. “I once conducted a wind tunnel experiment to represent snow drifts by supplying snow-like particles. I ended up with a huge difference between experimental results and actual phenomena because of the error I made when setting some of the conditions,” recalls Mr. Nozawa. At that time, he recognized that both wind tunnel experiments and CFD simulations were capable of qualitatively estimating the effects, but neither was capable of quantitatively predicting the actual phenomena. Now, his view has changed.

“Ask for help rather than try to do something you are not good at. That’s my principle,” says Mr. Nozawa. Software Cradle has participated in Mr. Nozawa’s research by providing analytical support. “In this way I could focus on what I’m good at, and that helped me make fast and efficient progress on my research. Some interesting ideas came from Software Cradle engineers who had different views,” says Mr. Nozawa.

Tackling wind minimization was a new challenge for Software Cradle engineers. Mr. Nozawa made it more challenging by asking them to accurately represent the phenomena, where the turbine rotates by means of the lift force created from winds, rather than being rotated at a given speed and wind is applied as an inflow condition. Despite the challenge, Mr. Nozawa and Software Cradle successfully represented the phenomena using CFD simulations.

Ways to use CFD Simulation Results and the Benefits

When Mr. Nozawa’s project was featured on a Japanese TV program, some of the CFD analysis results were used to illustrate the wind-minimizing effect in a way audience could easily understand. “It’s striking to see the visualized analysis results of winds, which are normally invisible. We used some of the visualization results from the analyses performed by Software Cradle. Many in the audience responded positively after the show. These visualized images helped them understand the phenomena. Visualizing results is beneficial for researchers, too. We know the qualitative flow before the wind tunnel experiments are performed, and we can also identify effects that cannot be evaluated in experiments,” says Mr. Nozawa.

Mr. Nozawa considers each result from wind tunnel experiments and CFD simulations as just one outcome for a certain condition. “In the end, the physics behind the natural wind environment is all there is. I think the technology needed to control strong winds will progress drastically if we can simulate natural phenomena by synergistically using wind tunnel experiments and CFD simulations,” says Mr. Nozawa.


CFD as a Means to Provide Comfort

Mr. Nozawa predicts there will be changes to CFD applications in the environmental and energy fields. “I’m hoping to see various applications that help improve the level of comfort. For example, it would be nice if we could put various manufacturers’ wind power generators on the roof of a building, click an ‘estimate power generation’ icon and instantly estimate the annual power generation based on the wind speed and direction at the location. Then one could purchase the electricity accordingly. Or, if we could install the wind-minimizing, power-generating turbine system, we would be able to instantly find out how weak the wind would become just by clicking a ‘wind environment’ icon,” explains Mr. Nozawa.

hroughout his research, Mr. Nozawa explores ways to convert strong winds to pleasant breezes and provide a comfortable environment. He expects the significance of CFD, as a tool to help deliver improved safety, reliability, and comfort, will grow even more.

*All product and service names mentioned are registered trademarks or trademarks of their respective companies.
*Contents and specifications of products are as of February 1, 2015 and subject to change without notice. We shall not be held liable for any errors in figures and pictures, or any typographical errors.