Instead of traditional qualitative research methods, a project assistant professor Yuta Shiino (Ph.D.) from the University Museum at the University of Tokyo applied computatinal fluid dynamics (CFD) simulation. By performing fluid analyses of fossil brachiopods and trilobites, he succeeded in exposing the biology of the ancient organisms, which was not easily identified using traditional research methods. 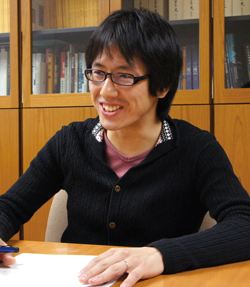 
Paleontology is often associated with researchers hunting for fossils in woods and mountains, and looking for new species to add to the classification chart. A few exceptions exist among paleontologists. Dr. Shiino, who works for the Museum Group for Promoting Cutting-Edge Research in Macroscopic Sciences, pursues research from a different approach. Dr. Shiino describes this research as “a study to uncover the living motions from unmoving fossils.” Dr. Shiino started using SC/Tetra to perform fluid analyses during his doctoral program where he used CFD simulation to understand the lives of ancient underwater organisms.

Fluid Analysis of Brachiopods: A Species that Prospered in the Paleozoic Era

Dr. Shiino first started using fluid analysis to study brachiopods. The brachiopods were at their peak in the Paleozoic Era spanning 250 to 540 million years ago, and they have marginally survived in the ocean today. Despite an appearance that resembles bivalves, brachiopods are completely different organisms. Bivalves, which include clams, oysters, and mussels, contain a muscular body inside their shell. In contrast, brachiopods consist of virtually hollow shells. Brachiopod tentacles align alongside thin bones for filtering food and providing respiration. Bivalves permit water to flow in and out through siphons for food filtration and respiration. Brachiopods are inferior to circulate water on their own, nor actively move, as they cleverly use the water that naturally flows inside the shell through small gape to perform their life functions. This underlines how important effective water distribution is for their food filtration and respiration. “They are the ultimate couch potatoes, so to speak,” explains Dr. Shiino with a smile. He used CFD to simulate how brachiopods use water flow to support their natural biological functions. 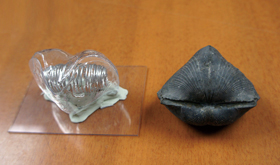 Figure 1: A model and fossil of a brachiopod (spiral thin bones are reproduced by aluminum wires for water flow tests)

Dr. Shiino’s first research target was the spirifer, also known as the Swallow Stone in China, a type of brachiopods, which can have diverse body shapes. Because of its unique characteristic of having spiral food-filtering organ carpal bones (shown in Figure 1), many researchers have conducted experiments to investigate the relationship between the brachiopod body shapes and fluid flow. However, difficulties in visualizing the fluid flow during the tests limited the research to more of the qualitative level. As a result, an endless cycle of new theories and counter theories continued until recently. Having conducted his own water flow experiments, Dr. Shiino believed that more quantitative results were in demand. He considered using high-end experimental equipment that would generate more accurate data, but the cost and construction time to improve the equipment was unrealistic. That helped him with making a firm decision to apply fluid analysis. 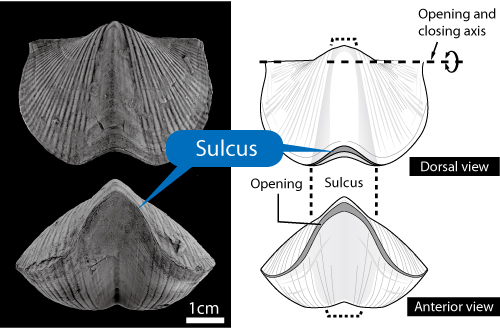 Figure 2: Paraspirifer fossil (on left) and model diagram (on right)

Figure 3: Flow simulation around the model with streamlines (flows for ventral valve in above, for dorsal valve below).

The median depression of a brachiopod, which resembles a beak, is called the sulcus. The convex side of the shell is called the dorsal valve, while the concave side anterior (Figure 2). Dr. Shiino used fluid analyses to evaluate the effects of water flowing from both dorsal and ventral valves (Figure 3). Although the detected flow rate was small, the result showed that the water always entered from the central sulcus and exited from the gapes lateral to the sulcus regardless of the flow directions and velocity. Dr. Shiino also found that the water coming from the sulcus circulated along the spiral bones toward each end.

Two theories were dominant prior to Dr. Shiino’s finding: one suggested that water entered from both ends and exited from the sulcus. Another hypothesized that water entered from sulcus and exited from both ends. No one suspected of the spiral swirling water flowing through the shell. Dr. Shiino has repeated analyses with different configurations, but the result was consistent throughout. Water enters from the center and leaves from the remain due to the constant pressure difference along the gape. Effective food filtration and respiration were made possible by the spiral swirling water flow created inside the shell, which increased the tentacle surface along the spiral bone with respect to incoming water.

The spiral swirling water flow and the locations of inlet/outlet were also confirmed in a precise experiment using detailed model. Dr. Shiino says that he received sharp criticisms when he first presented the results in a paper, but scientists now agree, to some extent, that the mechanism Dr. Shiino proposes is biologically reasonable. In addition, the quantitative and qualitative approaches to research from several other brachiopods have shown similar results.


Analysis of a Trilobite Exoskeleton from a Fluid Dynamics Perspective

Another example of applying fluid analysis to the study of fossils is a swimming simulation of Hypodicranotus striatulus, a species of trilobites (Figure 4). Trilobites are extinct animals, prospered in the Paleozoic period. Categorically they are classified as an arthropod, just as is the armadillidium vulgare, or commonly known pill-bug. Trilobites were essentially benthic, living at the bottom of sea but Hypodicranotus was thought to be swimmers unlike other trilobites, because of their spikeless, smooth surfaces. 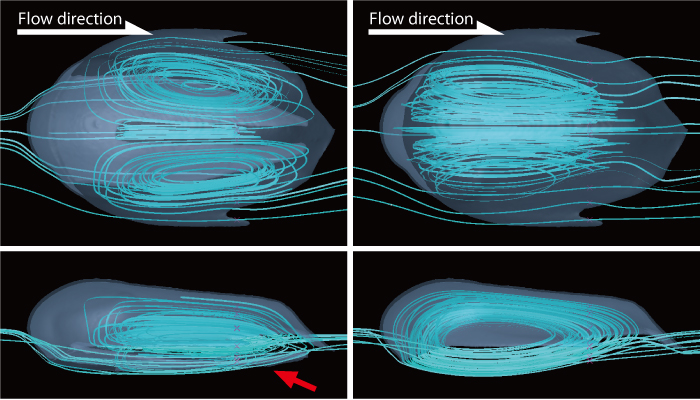 Figure 5: Streamline display of fluid structure around skeleton (with the fork on left, without the fork on right.

The fluid analysis of Hypodicranotus showed that three distinct eddies were formed around the fork-shaped hypostome, regardless of the flow velocity – one on each side in the shell, and one more between the gap of the fork. Water entered through the gap of the fork, forming a vertical eddy against the body that swirled closely to the body towards the front direction. This resembles a tadpole shrimp, which captures food by moving its parted legs to create flow from its chest to its mouth. Dr. Shiino suggested Hypodicranotus used a similar mechanism. On the other hand, the results of a model without the fork-shaped hypostome showed that the flow velocity strongly influenced the forming of unstable eddies inside the shell, in some cases causing turbulence to shake the eddies and shift the eddies downwards (Figure 5). Dr. Shiino explains that the hypostome could be a vehicle’s rectifier equivalent to the structure of Hypodicranotus.

Dr. Shiino further notes that the hypostome gives more stable lift to the body. Although only a slight difference in drag resistance was observed for the analyses with and without the fork, a gradual increase in lift was observed as the flow velocity rose with the fork. In contrast, the lift first rose then fell without the fork. Dr. Shiino concluded that Hypodicranotus can stably swim under water with the fork hypostome, whereas swimming would become unstable without the fork. To continue to swim without the fork, Hypodicranotus would have to continually adjust its angle of attack according to the flow velocity, the conjecture that seems to be biologically unreasonable.

Based on this finding, Dr. Shiino suggests that while Hypodicranotus was likely to be benthic most of the time, it was capable of swimming by generating a substantial lift. “Hypodicranotus may have been mostly benthic, but it could have swum swiftly if necessary, just like big marine isopods do,” explains Dr. Shiino.

Dr. Shiino was unfamiliar with fluid analysis before this work, and felt, at the time, that it was too advanced. However, a highly regarded colleague recommended he consider using fluid analysis, and Dr. Shiino decided to try using fluid analysis to quantitatively demonstrate the possible patterns and tendencies created by different body shapes. One objective was to investigate and then numerically calculate how long a species could survive by enhanced capabilities of certain functions. One half year later, Dr. Shiino successfully generated his first results. “The challenge was certainly greater than I thought it would be when my colleague first suggested this approach. I just fell for his enthusiasm,” says Dr. Shiino with a smile. This application of fluid analysis was highly recognized in the academic world, that it was introduced as an example in paleontology text book (Sutton et al. Techniques for Virtual Palaeontology, Wiley-Blackwell, 2014). Dr. Shiino has become a pioneer in paleontology due to his relentless search to uncover the true nature of fossil organisms using novel computational methods.

Dr. Shiino was motivated to try using SC/Tetra for his fluid analysis work when a professor colleague in the laboratory recommended it after successfully simulating blood vessel circulation. SC/Tetra was user-friendly, and proved to be the ideal all-in-one software package for Dr. Shiino. At this time he was still in his doctorate’s program and needed software he could learn quickly because he had little time. SC/Tetra accuracy and high credibility were also persuasive.

Dr. Shiino has been grateful for the exceptional technical support provided by Cradle and considers their technical advice essential to his research. “To me, having high quality technical support is like having a certificate that guarantees the reliability of the analysis methods. In some sense, Cradle engineers are almost like colleagues and co-authors to me,” describes Dr. Shiino.

Unlike recent biological evolution research that has centered on genetic decoding, genetic information traditionally cannot be identified in paleontology. Dr. Shiino believes that evolution of species over a long time period can be recognized in paleontology by investigating the shape characteristics of ancient organisms. Dr. Shiino has already started evaluating various brachiopods, and is convinced that this research could lead to a paleontology based evolution theory. He is eager to collect further data for trilobites as well.

Concurrent with this research, Dr. Shiino has also been interested in identifying undiscovered capabilities of ancient organisms. He says that today’s organisms appear to have extremely balanced designs compared to ancient organisms that optimized their functions for a specific environment.

In the course of evolution, brachiopods eliminated many active behaviors and acquired an appearance that embodied their more passive nature. However, over time, they were later replaced by more actively behaving shellfish. While exactly how and why this happened is still the subject of much study, brachiopods survived because their body designs and functions adapted to changing environments. “I find that today’s researchers mainly use existing organisms for their research. This is especially apparent in biomimicry,” Dr. Shiino points out. “I’m fascinated that 540 million years of evidence for almost all the living organisms on the earth still remains untouched. Tons of discoveries are waiting to happen. That’s the area I’m interested in,” says Dr. Shiino. With his unconventional approach to incorporate fluid analysis into paleontological studies, Dr. Shiino’s future research will likely draw significant attention. 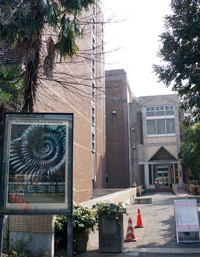 *All product and service names mentioned are registered trademarks or trademarks of their respective companies.
*Contents and specifications of products are as of February 1, 2014 and subject to change without notice. We shall not be held liable for any errors in figures and pictures, or any typographical errors.