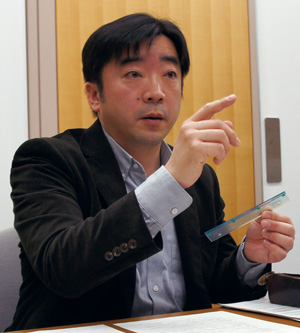 
Located in Ueno Park (Tokyo, Japan), the National Research Institute for Cultural Properties conducts research on Japanese and overseas art artifacts and assets. The organization was founded in 1939 as the affiliated art research institution of the Imperial Art Academy, which changed to the Tokyo National Research Institute of Cultural Properties in 1952. Since the transition, the Institute has diversified the range of divisions, and established, for example, the Department of Intangible Cultural Heritage and Center for Conservation Science and Restoration Techniques (CCR).

Dr. Masahide Inuzuka, the Senior Researcher at CCR, is responsible for research on preservation environment and analytic science. A number of factors affect artifact and asset degradation. In terms of physical science, these factors include temperature, humidity, light such as ultraviolet and infrared, and chemical substances in the atmosphere or building materials. From the aspect of biological sciences, insects and molds can have adverse effects. Since temperature and humidity are closely linked to the other factors, these two parameters are two of the most important considerations for preservation management. Dr. Inuzuka uses thermal fluid analyses to investigate the hygrothermal environment.

Preservation Environment of Cultural Artifacts and Assets at a Turning Point

Ideally, cultural artifacts and assets should be maintained at optimum temperature and relative humidity levels. Different levels apply depending on the artifact and asset materials, such as whether they are made from paper or metals. This is the case whether designing small art showcases or large-scale repositories. An air-conditioning system is often installed inside the holding area to maintain optimum temperature and relative humidity. Dr. Inuzuka says that many of Japan's museum showcases and repositories built between the post-war and pre-recession era have degraded. At the same time, the demand for high energy efficiency has risen since the earthquake and tsunami disaster in 2011. Dr. Inuzuka says this means designing and maintaining energy efficient preservation environments for cultural artifacts and assets is now at a turning point.

A major challenge facing Dr. Inuzuka is that even though facilities are degrading, it would be cost prohibitive to rebuild the entire facility. Also, constructing new preservation facilities without sufficient evaluation, could further endanger the integrity of the cultural artifacts and assets. The use of CFD simulations can reduce the risk and lower the cost for experimental evaluation. Considering these benefits, Dr. Inuzuka thought that introducing a thermal fluid analysis tool was desirable. 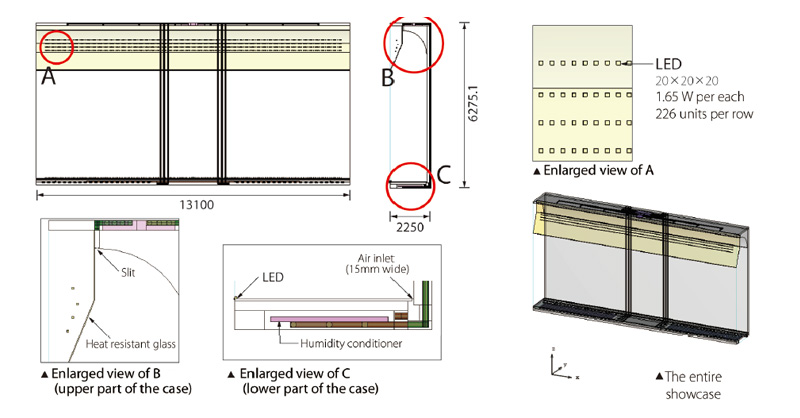 Fig 1: Illustration of the showcase.


First Attempt to Implement a Fan inside a Showcase

Dr. Inuzuka participated in the design of a large showcase for the Mie Prefectural Museum, which opened in April 2014. The showcase exhibits large paintings and traditional folding screens. It is 13m wide, 2m deep, and two story (6m) high. It is the largest showcase of its kind in the nation.

Two issues were concerned; the first was the high temperatures generated by the lighting equipment, and the second was the large temperature/humidity gradient inside the showcase. If there is a large temperature/humidity difference between the upper and lower sections of the showcase, the displayed artifact may stretch unevenly and cause serious damage. To avoid this, the museum decided to use a fan to circulate the air inside the showcase. This was a novel idea at the time, and the effectiveness of the fan was unknown.

The target air velocity inside the showcase was less than 0.3m/s. Four rows of LED lights were located at the top of the showcase. A single row was located at the bottom. Each row consisted of 226 individual LEDs. The exhibit space at the top of the showcase was separated from the LED lights by a plate of heat resistant glass. Simulations were conducted assuming the relative humidity on the surface of the silica gel humidity conditioner was kept at 60%. Dr. Inuzuka performed steady-state CFD analyses to evaluate temperature and humidity with and without the fan.

The experimental measurements clearly showed that air circulation improved the quality of the environment. Although the calculated temperatures were higher than the measured temperatures, relative humidity values for both the simulation and measurements agreed well.

Fig 5: Overview of temple interior space. The orange wall area shows the space allocated as votive tablet painting hall.
The area surrounded by the light green and purple walls is the main hall.
1: Wind inlet, 2: Wind outlet (a gap inserted at the top)
X to the East, Y to the North, uphill outside the East and North ends. 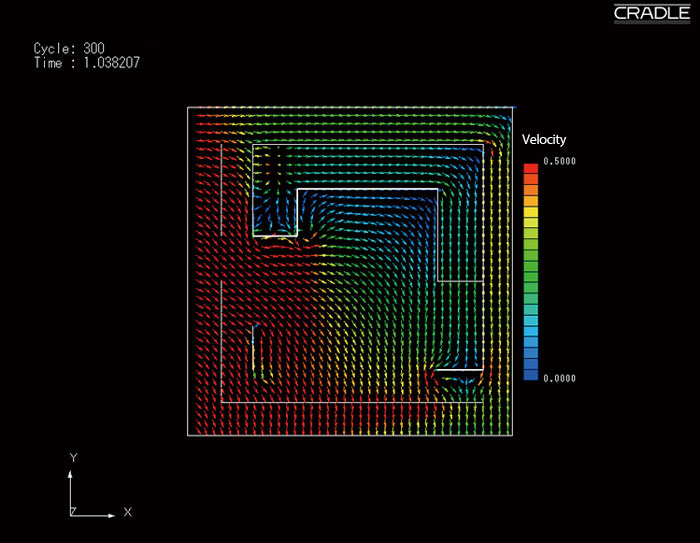 Fig 6: Analysis results of temple interior space. Representing the situation where wind inlet, outlet, and the window located at 3 are all open.


Simulation of Cultural Artifacts and Assets Owned by Temples

In Japan, many cultural artifacts and assets are owned by local temples. This can make preservation difficult. An example is a temple located by a coast, which Dr. Inuzuka also researched. The temple owned wooden votive tablet paintings subject to humidity levels exceeding 90% in some seasons.

A hall dedicated to displaying the tablet paintings is built around the main hall. This hall is often kept shut. Air-conditioning was not available because of difficulties providing power to the hall and the humidity could be very high. To lower humidity, Dr. Inuzuka used scSTREAM to evaluate ways to improve ventilation.

Dr. Inuzuka investigated the wind direction and air velocity around the hall. He suggested installing vent holes around the hall which would permit air to enter and leave the hall (Fig 5). Calculations were made assuming that the wind blew due east at 0.5m/s. Dr. Inuzuka simulated the airflow inside the hall, when using a (1)air inlet, (2)air outlet, and (3)slit gap. From the results (Fig 6), Dr. Inuzuka confirmed the ventilation efffects created by the slit gap and a vent hole for the air outlet.

Another example of applying scSTREAM was for the design of a repository in Tokyo. Dr. Inuzuka wanted to know whether the air could be designed to flow across the entire space by effectively locating the air-conditioner and shelves. He used the results to plan the layout, and conducted experiments to confirm the results. He measured the air velocity at various locations and confirmed that the airflow behaved as predicted.

In addition to using scSTREAM, Dr. Inuzuka also uses NETS, a heat and air transfer system simulation program developed by Shimizu Corporation. NETS accounts for walls and other components and calculates the temperature and humidity of the internal space as a function of outside weather conditions. This is used to evaluate how the internal environment changes throughout the year. NETS makes it possible to quickly identify seasonal effects. On the other hand, it is not easy to calculate spatial distribution by using NETS.

Dr. Inuzuka uses scSTREAM to calculate spatial distributions for temperature and humidity. Of the several thermal/fluid software he considered, one of the primary reasons Dr. Inuzuka chose scSTREAM was because of its reliable technical support.

Going forward, Dr. Inuzuka is eager to pursue more accurate humidity calculations. “Understanding the humidity conditions surrounding cultural artifacts and assets is far more important than temperature. When we were working on the showcase for the Mie Prefectural Museum, we asked Cradle to conduct the analyses because modeling the humidity conditioner was difficult. We hope to be able to represent the mechanism of moisture absorption and desorption in future,” says Dr. Inuzuka. He points out that materials such as paper, soil, wood, and stones could also act as humidity conditioners. Dr. Inuzuka suggests that the scope of CFD analyses can be further expanded if he can precisely predict the degree of moisture absorption and desorption of cultural assets such as a stone or wooden statue.

Another topic Dr. Inuzuka is interested in studying is simulation of a semi outdoor environment that surrounds cultural artifacts and assets. Dr. Inuzuka is currently working on a decorated ancient Japanese tomb in Fukuoka, Japan. Tombs are abundant in Fukuoka and Kumamoto prefectures. They can be directly exposed to the outdoors, buried in the ground, or preserved inside a preservation facility. Dr. Inuzuka hopes to simulate the environment for the tombs inside preservation facilities.

Another challenge is to preserve cultural artifacts and assets from being damaged by natural hazards. A significant number of important cultural artifacts and assets were ravaged by the earthquake and tsunami disaster in 2011. Though some of them were rescued, a problem arose as to where these dirt covered assets should be stored. Some were temporarily transferred to closed schools and later moved to better maintained environments but others were left untouched. Some were delivered to specialized facilities and stored in repositories with double layer walls. Dr. Inuzuka says that simulation will make it easier to identify the ideal storage environments.

Dr. Inuzuka explains that researchers in this field around the world are currently evaluating the way air-conditioning should be used and other means for maintaining preservation environments. Although air-conditioner capabilities have largely improved, cost correlates with the amount of energy used. Switching to simpler forms of air-conditioning could consume less energy and lower costs. The challenge is to ensure that the integrity of the cultural artifacts and assets is maintained. Dr. Inuzuka suggests that this issue can be resolved by performing assessments using CFD tools. He expects simulation will a play significant role in the future.

*All product and service names mentioned are registered trademarks or trademarks of their respective companies.
*Contents and specifications of products are as of January 31, 2015 and subject to change without notice. We shall not be held liable for any errors in figures and pictures, or any typographical errors.