Murata Machinery, primarily dealing with manufacturing of textile machinery as well as machine tools etc., has successfully reduced lead time and prototype production by applying fluid analysis to their product development. They explain that Cradle’s fluid analysis software helps simulate the operation of large-scale systems, visualize the air-flow inside a space that cannot be observed easily in actual tests, and create powerful presentations for their customers. 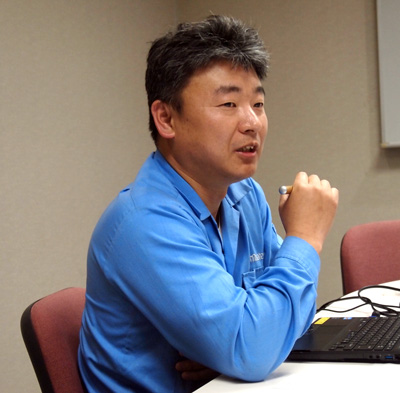 
As a leading company in the textile machinery industry, Murata Machinery, Ltd. produces machinery for various textiles, which are widely used by dominant spinning mills and synthetic fiber manufacturers. Since founded in 1935 in Kyoto as a manufacturer of Jacquard looms, they have now become one of the prominent companies that offer innovative textile machinery. Muratec Two-for-One Twister, an individual spindle for industrial yarn, has the best delivery record in the world, while their automatic winder occupies a large share in global market. The presence of Murata Machinery is significant in today’s fashion industry.

As well as manufacturing textile machinery, their businesses extend to diverse areas, including the production of machine tools such as lathe and turret punch press. They dealt with tool cabinets in 1962, which then expanded tremendously as to provide automatic guided vehicle system needed for the manufacturing process in factories. The technology cultivated while developing the system to integrate hardware, software and engineering skills, has been used to construct logistics systems for medicine, food, publishing, textile, and conveyance fields. This further led to the development of conveyance system for clean rooms and manufacturing of appliances for automatic guided vehicles used in the production of semiconductors and liquid crystal displays.

Additionally, Murata Machinery produces digital multifunctional peripherals. In 1973, only a year after the telephone lines became available in Japan, their facsimile received the first approval from the Nippon Telegraph and Telephone Public Corporation (now known as NTT). From then on Murata Machinery has been manufacturing different types of digital multifunctional peripherals to this day.

Murata Machinery started to apply analysis tools in 1990, first with fluid analysis. They were developing VORTEX® at the time, a spinning machine that generates yarn by twisting fibers with aerodynamic force. Although they tested to examine the air-flow inside components, the parts were too small that they could only observe the intake flow rate. They also had a problem with maintenance of own solver, as it was a considerable burden to simultaneously undertake both analysis and product development on the same machine. That led them to bring in scSTREAM, a structured grid solver, followed by simulating automatic winder, designing duct for textile factory, analyzing dust dispersion in clean room, and analyzing multifunctional peripherals and machine tools. They are currently using SC/Tetra, an unstructured grid solver, to analyze dust dispersion and textile machinery mechanism.

By introducing fluid analysis, Murata Machinery has successfully reduced cost and development time (Figure 1). Product development consists of planning, designing, analysis, prototype production, and testing processes. They can only start packaging when they successfully produce a prototype that performs equally or better than the estimation. In one case where they did not use fluid analysis software, they had to repeat the cycle from the planning to testing processes five times before packaging. On the other hand, with fluid analysis software, although they still had to repeat the cycle from the planning to analysis six times and then produce a prototype to test the performance, they could start packaging after repeating the cycle from testing back to planning only twice. Mr. Hidetoshi Takeuchi from Murata Machinery explains that the use of fluid analysis helped reduce the number of prototype production to twice which was originally five. “It reduced the time needed before packaging and production cost for prototype molds,” he says. At the same time, it also helped predict possible troubles before prototype production.

Mr. Takeuchi evaluated different fluid analysis tools but selected SC/Tetra for several reasons. First, the software is capable of working with overset grids, making an analysis of moving objects expansible. As conveyance devices in clean rooms must be analyzed separately, this function in SC/Tetra was crucial. Second, mesh control can be done more precisely, which the octree can handle easily. Mr. Takeuchi was also impressed with the functions in the postprocessor. “Before we selected Cradle’s software, we had attended their user conferences and saw the postprocessor demonstrated. We had also done some research. But even so, we were still amazed at the postprocessor’s capability; it performs much better than other specialized post-processing software,” he says. He also notes that it is easy to operate. Files can be transferred by drag and drop, the task management tool can be used easily and condition files in text format (S files) can be easily edited to enable similar calculations. Overall, Cradle’s postprocessor minimized physical workload and the engineers’ mental stress.

Mr. Takeuchi explains that they prioritize on minimizing the preprocessor workload, at the same time maintaining sufficient accuracy and calculation time when using the analysis tool. In terms of the degree of operability and capabilities of preprocessor and postprocessor, Cradle’s software is highly regarded at Murata Machinery. 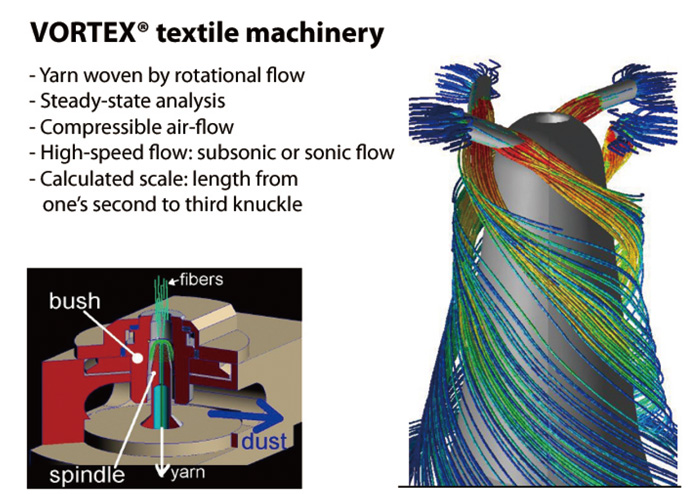 Figure 2: Application example of SC/Tetra for development of VORTEX third generation. Steady-state analysis was undertaken to evaluate compress
ible air-flow in the space where yarn is woven by rotational flow.

The product development that motivated Murata Machinery to introduce fluid analysis involved their major textile machinery products, VORTEX®. By applying fluid analysis to visualize the aerodynamic phenomena in VORTEX®, Murata Machinery engineers were able to better understand air-flow inside the small space of the equipment. Two things make VORTEX® unique. It is able to automatically detect and remove faults to ensure the quality of the final product. It also possesses superior spinning performance. Because of these, yarn generated by VORTEX® embraces exceptional characteristics; it produces less lint, dries quickly due to its high degree of hygroscopicity, thus preventing clothing from deforming after being washed many times. When VORTEX® yarn is woven into a piece of textile, the surface is sleek and smooth. This makes printing easier and effective. It also prevents pilling. Offering both fashionable and functional quality, VORTEX® yarn is highly acknowledged and favorably used by worldwide textile manufacturers to develop products with high added values.

The length of yarn calculated in the analysis is approximately equal to the distance between a person’s second and third knuckles. Fiber sets in from above and is loosened by continuous air owing at subsonic to sonic speeds. The fiber is then twisted into yarn by rotational flow. Although high speed cameras recording at more than one million frames per section now make it possible to observe the phenomena inside VORTEX®, this was not the case back when computer simulation was introduced. By applying fluid analysis to visualize the air-flow, Murata Machinery was able to advance beyond their engineers’ experience (Figure 2). 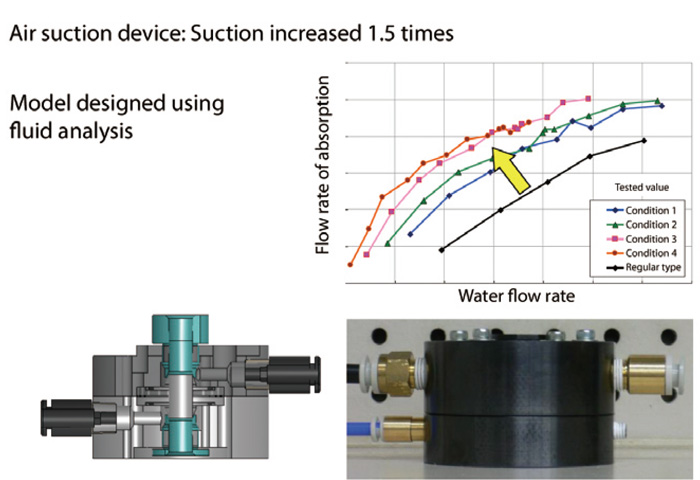 
The Air Suction Device is another example where Murata Machinery was able to use fluid analysis to reduce product development time and only conduct a few prototype tests (Figure 3). The Air Suction Device is mainly used for textile machinery to remove unnecessary threads by ejecting high speed air and entraining surrounding air. Intending to generate more suction than conventional devices, Murata Machinery performed analyses ten times in one week to determine the best design. Based on this they created a prototype for a two week period. The test result showed that the device achieved the estimated performance, and Murata Machinery decided to proceed to production. This is an excellent example demonstrating how the use of computation simulation can reduce the time for prototype production and testing and as a result, reduce both time to market and overall cost.

Murata Machinery has also applied SC/Tetra to develop products and use the graphics of analysis results for meetings with their customers. This is beneficial when the product is very large, very small, not easily accessible, not physically visible, or functions at extreme operating conditions. One example is a crane, which conveys cassettes containing liquid crystal panels packed in a clean room. When moving vertically and horizontally, the cassettes scatter micrometer sized dust particles into the air, which could cause fatal flaws when dealing with semiconductor or FPD (Flat Panel Display) related appliances. Even if prevention measures are taken, it is difficult to prove the effectiveness. Mr. Takeuchi says that applying SC/Tetra offered a solution to this. Murata Machinery used analysis results to demonstrate and explain how the equipment mechanism worked, and successfully convinced the customer to proceed with this design. In this case, Murata Machinery carried out a transient analysis with incompressible flow and overset grids to evaluate the moving object, as shown in Figure 4. “If I’m not mistaken, we are the first company to use visual CFD analysis results on conveyance devices in clean rooms, for presentations to customers,” says Mr. Takeuchi. 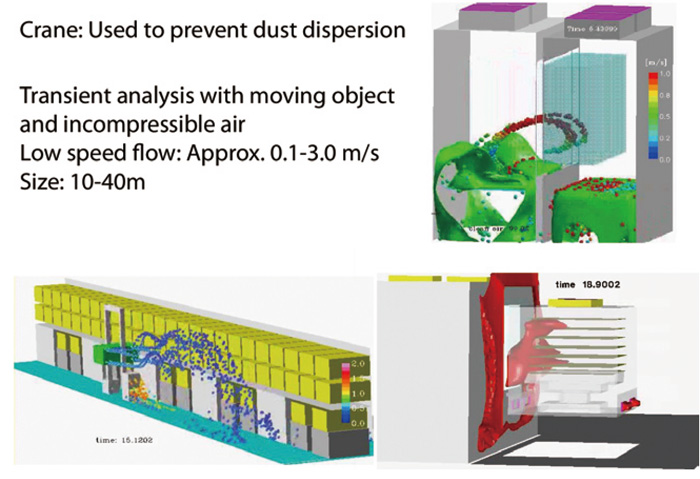 On the other hand, Mr. Takeuchi believes there are many opportunities to improve fluid analysis. He thinks that the contact function can be improved for a six degree of freedom analysis. He believes it will be possible to integrate other software if Cradle incorporates ideas of contact mechanics and body dynamics. “It would mean that analysis could be used for other purposes,” he explains. He also hopes to reverse the mesh sizes of moving objects and the surroundings when dealing with overset grids. In the current version of the software, mesh sizes of the surroundings need to be equal to or smaller than the mesh within the moving objects to produce high accuracy. However, as the company places more emphasis on the behavior of moving objects, it is desirable to use smaller meshes for the moving objects.

In the future, Murata Machinery hopes to work more on large-scale computation. They are especially interested in undertaking aerodynamic noise analysis using a clustered environment. “Noise has become an important issue for almost all product development, and it must be solved if the model is to achieve the required performance,” says Mr. Takeuchi. Since Murata Machinery has little experience working in this area, they are taking their first steps when it comes to performing large-scale computations. To manage job tasks and licenses, they are planning to use Windows® and HPC Server. Another related challenge is to promote the engineers’ understanding of fluid analysis. They hope to continue this through central management of licenses and making computing server available to more engineers.

In summary, Murata Machinery, who adapted fluid analysis software in the early stages, has demonstrated the potential of fluid analysis with some very insightful applications. Continued development is expected to lead to an even broader context of applications.

*All product and service names mentioned are registered trademarks or trademarks of their respective companies.
*Contents and specifications of products are as of April 1, 2013 and subject to change without notice. We shall not be held liable for any errors in figures and pictures, or any typographical errors.