Assisting Architectural Designs with a Variety of Simulations Using scSTREAM


In January 2012, Nikken Sekkei, one of the leading institutional architect offices in Japan, organized the Digital Design Project, a new project for supporting Building Information Modeling (BIM). The company had supported BIM in the past, and the organization of the new project was for gaining more momentum. One of the focal points in this effort is the BIM in terms of environmental/facility designing utilizing simulations, which is carried out by the Computer Aided Simulation (CAS) team in the Digital Design Project. We interviewed Mr. Osamu Nagase, the leader of the CAS team from Mechanical & Electrical Engineering Department, about this effort. 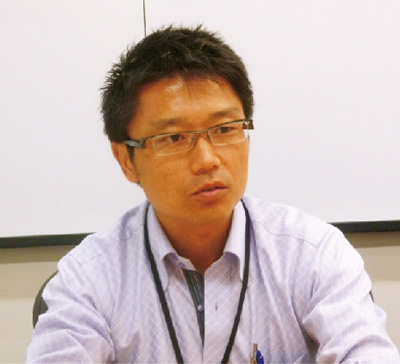 CAS Team Supporting BIM with a Variety of Simulations

"In the CAS team of the Digital Design Project, we are supporting BIM in our company by performing environmental simulations more widely and more quickly. We simulate not only special cases but also thermal/wind environments of general projects, and photic/acoustic environments," says Mr. Nagase. He is a manager of the Mechanical & Electrical Engineering Department as well as the leader of the CAS team of the Digital Design Project. He is a professional in simulations, so to speak, as he has worked mainly on facility designs and pioneered in simulations related to them for some twenty years with the company.

"When I joined the company, Nikken Sekkei had already introduced a thermo-fluid analysis software scSTREAM and worked on its utilization for air flow analyses. You can say it was a very advanced approach for a Japanese architect office then. He recalls that the computer was as slow as taking three months for one simulation. It can be said that simulations were somewhat special, experimental approaches for the designers in the company at the time. Since then, however, both hardware and software have evolved rapidly, and utilizations of simulations have spread widely to the designers in the company. And now, Mr. Nagase and his team takes on over one hundred simulation cases a year, or roughly ten cases a month.

"Sure, I believe the need was there for simulations back then. Especially for the designers in this company, it was asked of them to create something unique even in a small project. As they thought about how to design, there would be some ideas they stuck to. And there must have been desires to know how 'it would be like' if their designs had been materialized. But the designers back then might not have felt the presence of simulations like we do now as a tool to meet their needs."

In this perspective, the appearance of BIM was a major turning point. In Nikken Sekkei, where they got a head start in the industry on researches and promotions of BIM through the establishment of Digital Design Center (the predecessor of Digital Design Project), appreciation for simulations was caught on among their designers relatively quickly.

"Each designer has a different concept about simulations, and the system can be incomplete. But thanks to the growth of BIM, we've been gaining the ground to do various activities (with simulations). Our clients are beginning to change their mindsets, too." As mentioned before, Mr. Nagase and his team has worked on utilizing simulations for twenty some years; on the other hand, there are many clients with whom the historical company has over ten years of business relationships. In preliminary discussions with those clients, they increasingly come across requests such as, "You showed us those simulation results for the other project. Can you do simulations this time, too?"

"In fact, a lot of our clients request doing simulations once they saw our proposal with simulation results. It is because we can convey performances and advantages of the designs visually and comprehensively, so that they can evaluate the plans on clear basis." Amid the global trend toward energy-saving and environmental-consciousness in recent years, architectural industry is aiming strongly at building facilities that saves energy more effectively by examining various simulation results including comparisons between initial and running costs. As the importance of appealing their energy-saving efforts increases, there are inevitably growing needs for simulations that can appeal visually.

This new trend of utilizing simulations in Nikken Sekkei is symbolized by the project 'Sony City Osaki' for Sony Corporation, an office complex completed in March 2011. It is a 25-story building with cutting-edge technologies for environmental-friendliness. Among them, 'BIO SKIN' received much attention. 'BIO SKIN' is the world's first "blindlike" environmentally-conscious exterior system, which may reduce the development of heat-island phenomena. The system harnesses an innovative technology, where impounded rainwater is run through porous ceramic pipes, is filtered through pores to the surface, and evaporates. And vaporization heat cools down surrounding air. Based on full-scale experiments and simulation results, Nikken Sekkei went on to place BIO SKIN on the entire east wall of the building. 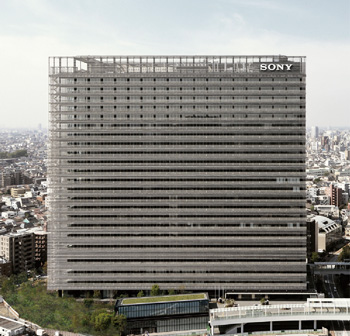 Analysis Tool Becoming a Great Advantage as Designers Utilize it Themselves

"In the BIO SKIN project, we used scSTREAM to evaluate its effect. Based on some measured data, we simulated that the temperature around the entrance would drop by two degrees C under a certain condition." In specific, the measured data was obtained from the experiments in Tokyo University. With that data, temperature simulations were performed for a summer day with a prevailing wind, while changing analysis conditions from half to full installation of the BIO SKIN on the wall. Of course, other buildings in the area were all modeled into the simulations, and surface temperature of nearby roads was taken into account as it would rise with the sunlight.

"This project became the news because it involved the utilization of a new material in energy-saving technologies, which was thought to have run out of new topics. Our client is showcasing a mock-up and the simulation results at the entrance of the building for publicity." Nevertheless, Mr. Nagase believes that simulations can be and should be utilized for more projects and not just for a big project like the BIO SKIN. For example, designers can use simulations to test a design when they are in doubt about if it is actually feasible. Simulation results may offer understandings and insights that can be useful in future designs. With more of those experiences, it may become possible to sense if a design is feasible or not, and they will perform simulations only when it is necessary. For this reason, it is important for designers themselves to use simulation tools. 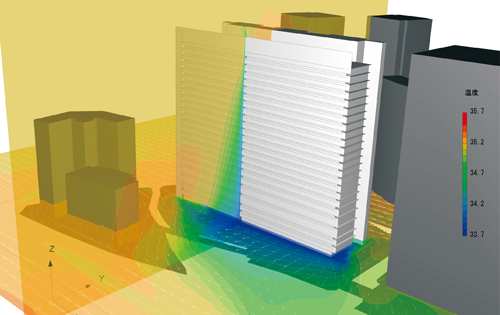 "You can see something you couldn't see before by quantifying it using simulations. For instance, you can see how much effect an exhaust of heat from a chimney has on an external air intake. There is no doubt in my mind that analysis tools like scSTREAM become a great advantage for designers in supporting their designs, if they can use those tools themselves and feed back various parameters including temperature from analysis results. Of course, there is much to learn before that, especially because simulation results can vary depending on boundary conditions. Evaluating results about 'if they are really right' is more important (than results themselves). Securing the validity of results is an urgent matter in popularizing analysis tools like scSTREAM as design tools. For the future, we'd like to clear those matters one by one so we can promote our effort as the CAS team."

*All product and service names mentioned are registered trademarks or trademarks of their respective companies.
*Contents and specifications of products are as of January 31, 2013 and subject to change without notice. We shall not be held liable for any errors in figures and pictures, or any typographical errors.