The finite volume method (FVM) is a method for estimating the amount of a physical quantity stored in a space based on the difference between the amount of inflow and outflow to the space.

Consider the situation where water is poured into a container as shown in Figure 5.4. The amount of water (variation) that accumulates in the container over a certain period is obtained from the difference between the amount of inflow and outflow. When the amount of accumulated water is determined, the change in the water level can be calculated knowing the dimensions of the container. This change in water level is an example of how a physical quantity is calculated using the finite volume method. 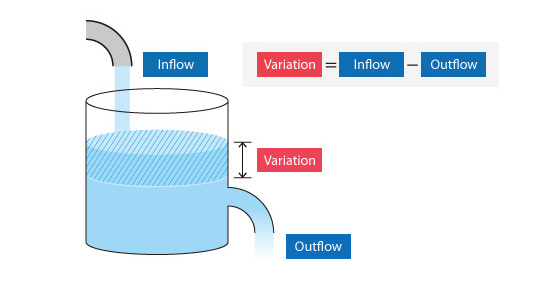 
In an actual analysis, the analysis target is divided into many small containers or spaces. The containers are connected as shown in Figure 5.5.

Figure 5.6: Inflow and outflow of heat

* The state corresponds to the state where the amounts of inflow and outflow in all the containers are balanced (water level does not change) in Figure 5.5. 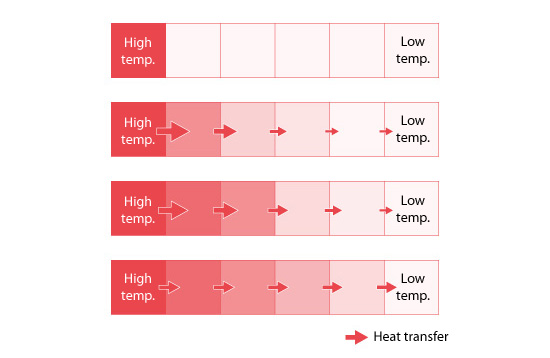 
This basic concept also applies to flows. The velocity change in each space is obtained by considering both the momenta flowing in and out of the space but also viscosity and pressure effects.

Figure 5.8: Inflow and outflow of momentum


Note that there is no governing equation to solve for pressure. To obtain pressure, other methods are used. For example, the fluid velocity can be calculated using an estimate of the pressure. Then the pressure is corrected such that the obtained velocity satisfies the equation of continuity.