One basic application of Computation Fluid Dynamics (CFD) is to simulate air flow in building spaces. The outputs from CFD can be used to ensure that air flow rate, velocities, and patterns meet environmental standards for human comfort. Taking a step further, CFD has recently been used to predict and evaluate thermal comfort using thermo-regulation models of the human body. 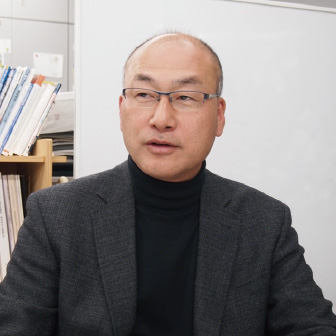 The Department of Architecture at Waseda University, the oldest private college in Japan, consists of six curriculum majors: architectural history, architectural planning, urban planning, environmental engineering, building production, and architectural structure. Prof. Tanabe works within environmental engineering, and his interests focus on evaluating human comfort and health in residential spaces. His research is directed at providing a better environment for both people and the earth by studying heat flow around human bodies in houses, cars, train stations and other public places. Today architects must consider how to achieve a safe and comfortable environment while minimizing energy consumption. To perform his studies, Prof. Tanabe uses SC/Tetra and JOS.

A Wide Variety of Studies

One of the most recent research applications of SC/Tetra and JOS is the simulation of the spread of airborne droplets from coughing. This is a critical research when studying the spread of virus infections such as the flu. As droplets are released by coughing, the liquid in the droplets quickly evaporate, and the nuclei of the droplets waft through the air. The nuclei waft, on average, for approximately 2m (6.5 ft) although their actual range depends on the air flow within the environment. Tuberculosis is an example of disease that spreads through the air. The concentration of the nuclei of tuberculosis, for example, can be considered a pollutant. Prof. Tanabe has used SC/Tetra to study the behavior of airborne droplets and pollutants and to design techniques for dispersing them so they are less harmful. He has used a "coughing manikin" to generate experimental data. 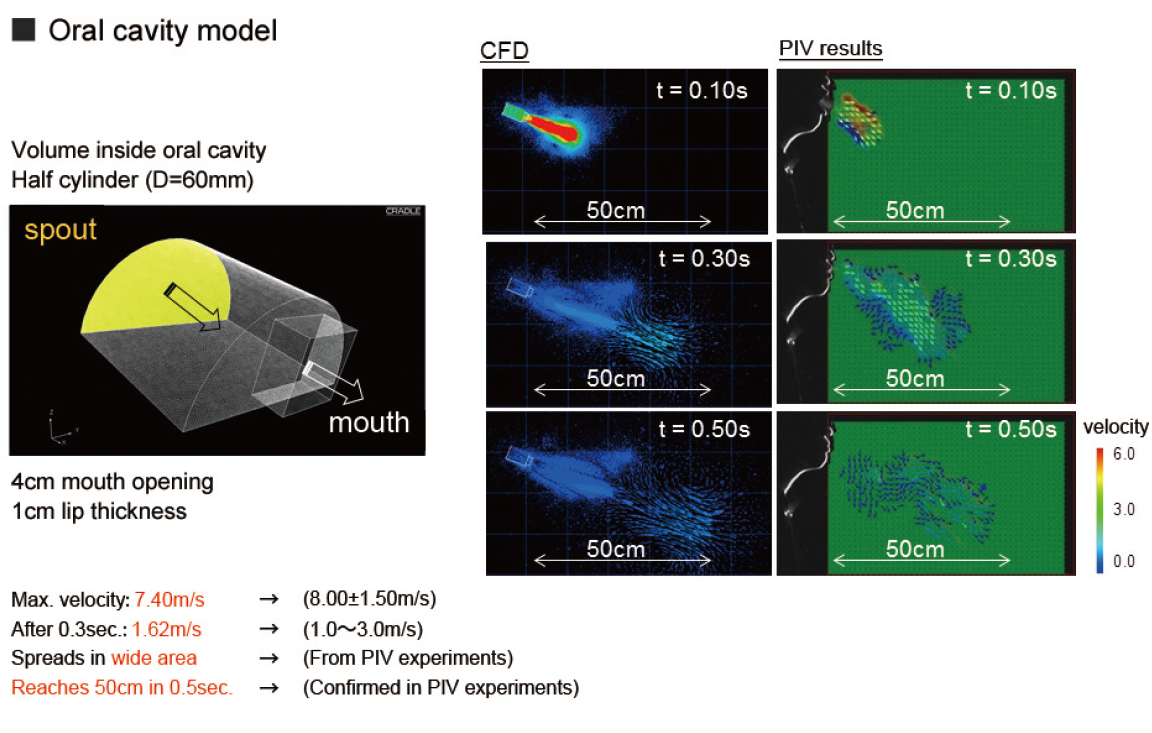 Figure 1. Development of a model for air flow of coughing with a modeled oral cavity

Another application of SC/Tetra and JOS has been for studying occupant comfort in vehicle interiors. This work has been done in collaboration with auto manufacturers. Recently, electric car interior comfort simulations have received a significant amount of attention because the electric car interior cannot be warmed by residual heat from the engine as it can with a combustion powered vehicle. This requires more efficient heating and air conditioning. Experiments are being conducted to assess other means of providing thermal comfort to vehicle occupants such as heated and cooled seats. The results of interior comfort studies can have even more impact on those who spend long periods of time in a vehicle such as truck drivers.

Combining the Thermoregulation Model and CFD

Prior to 2007, Prof. Tanabe's research has been largely experimental, studying both actual people and a dummy of the human body called a "thermal manikin". The "thermal manikin" could simulate the human body skin temperature. However, experimental testing does not offer the flexibility and insight that virtual simulation can, so one day Prof. Tanabe suggested integrating his JOS human body thermo-regulation model into CFD. After the suggestion, Software Cradle responded by making the JOS model available within SC/Tetra. Prof. Tanabe said "The JOS model was made available in SC/Tetra, and the heat fluxes through the skin for each body part could now be calculated in the simulation." This was exactly what Prof. Tanabe wanted. He went on to say "The people at Software Cradle put in a lot of really hard work into the code". Because of the complex geometry of the human body, SC/Tetra was chosen because it uses an unstructured mesh. The JOS model was first made available in SC/Tetra in 2007. 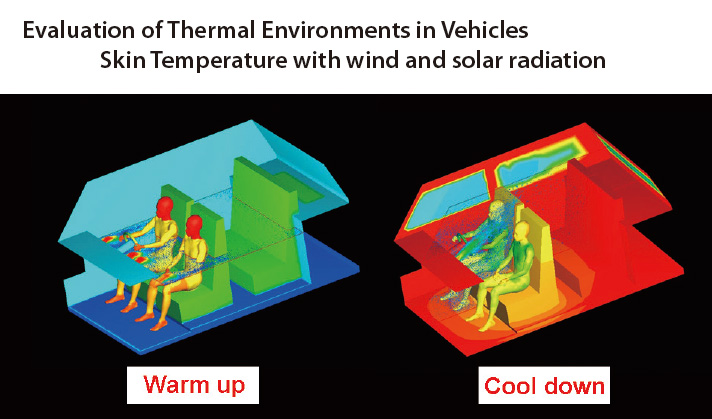 Prof. Tanabe cited some big advantages for using CFD to acquire insight compared to experiments. There is a large cost associated with hiring examinees for experimental tests. There is also a lot of variation in the results due to the wide range of individual characteristics of the examinees. The large variations require testing large samples, which means hiring more examinees. Additional complexities involve legal considerations. Some of the tests can be for products or systems that are industry secrets. The manufacturers want to expose their new concepts to as few people as possible. Lastly, some experiments require permission from an ethics committee, which can take several months.

In contrast, CFD opens up the windows of opportunity with very few constraints. Test parameters can be changed. A large number of test conditions can be simulated. The JOS model in SC/Tetra permits users to change gender, age, body size and other characteristics of the human body to assess impact on a wide population. Even the impact on the elderly can be assessed, which would normally not be included in experimental testing because of certain risks.

The human body model in JOS is divided into seventeen segments, each having an inner and outer layer. In the latest version of the software released in 2012, the head segment has four layers, which improves modeling accuracy. In addition to the segments, arterial and intravenous blood transports are calculated. Basal metabolism, thermal conductance, and heat capacity are specified as well. When the external environment causes the body temperature to exceed a specified threshold, blood transport in the skin is increased to release more heat from the body. If the temperature remains high, sweat is produced. The amount and distribution of sweat can be an output from the simulation. The JOS model developed by Prof. Tanabe is unique because it contains a large number of segments and results in increased accuracy for calculating time dependent changes in body temperature.

The practical aspects of using JOS in CFD software like SC/Tetra can be cumbersome. 3D geometry data of a human body must be created, and boundary condition information must be specified for each body segment. Fortunately, human body mesh models from scanned bodies are already included in SC/Tetra for three different postures, standing, seated, and seated on the floor. SC/Tetra can also accommodate new additional human body specifications and boundary information.

How JOS has evolved

The most difficult aspect of developing an accurate human body thermoregulation model is obtaining accurate material properties. This is where the JOS model in SC/Tetra has harnessed Prof. Tanabe's research findings. Because human organs and tissues are alive (unlike building materials), it is almost impossible to measure their material properties. Many other aspects of human bodies are also technically challenging to quantify. These include the heat capacities and thermal conductivities of skin and body fat, the amount of blood transport, and how nerves react to thermal conditions. In the past, the only way to acquire material property information was to consult past research. If the input data was not accurate, however (which was frequently the case), the simulation results were erroneous. 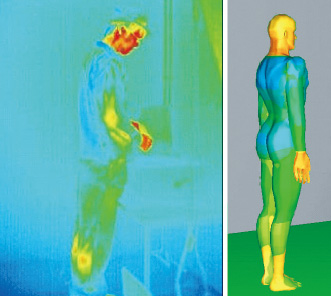 In contrast, by leveraging the experimental research conducted by Prof. Tanabe and marrying these results with the JOS model in SC/Tetra, the JOS model already contains significant "know-how". One example is the system for controlling body temperature. In the human body, sweating, increased/decreased blood transport, and material properties are all variables that control the body temperature. No significant body of medical research can provide input values for these critical phenomena. However, the JOS model uses empirical data obtained from Prof. Tanabe's experiments with human subjects to match simulation results with reality.

The latest version of SC/Tetra contains many improvements to the JOS model in response to customer requests. Major improvements have been made for face temperature control and sweating in warm environments. The face was not cooling as quickly as it should when exposed to a cool breeze such as air from an air conditioning system. Previously, the face was represented by two temperature layers, and the surface temperature was very close to the deep portion, which did not respond to temperature changes as quickly. Increasing the face model to include four layers enabled temperatures to change more easily.

Prof. Tanabe expects continued support from Cradle to make the SC/Tetra even more capable in the future, not only for JOS applications but also other architectural applications. Two areas of interest for architectural applications is smoothly coupling the air flow and/or thermal conditions with structural analysis or lighting in the surroundings. If we can easily review many designs with regard to these aspects and maintain the reputation for high accuracy by SC/Tetra and scSTREAM (Cradle's general purpose, structured grid CFD software), that is going to be very helpful.

Prof. Tanabe also aims to improve the JOS model even more. For example, one area of improvement is clothing. Although the current model considers clothing, it does not reproduce the shape of the clothing perfectly, nor are there gaps between the clothing and the skin as there should be. In addition, clothing is porous, permitting air through the material. This is a difficult phenomenon to replicate in a CFD simulation. Prof. Tanabe re-emphasized his commitment to continue improving the JOS model. I will update the model every time we obtain new empirical data for human bodies. Improving the model is a continual process. 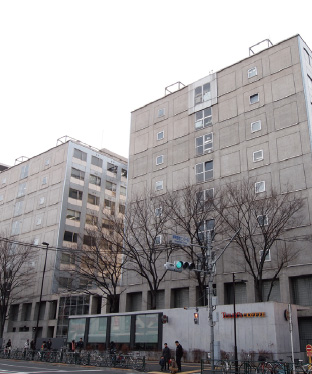 *All product and service names mentioned are registered trademarks or trademarks of their respective companies.
*Contents and specifications of products are as of January 31, 2013 and subject to change without notice. We shall not be held liable for any errors in figures and pictures, or any typographical errors.