Performing Analysis including Fans and Utilizing Results in Many Areas


A fan is considered to be relatively unsuitable for thermo-fluid analysis among electronics components. Because a fan is a moving component, flow around the fan is normally extremely complicated. We interviewed a staff of ORIENTAL MOTOR CO., LTD. (hereinafter, Oriental Motor) about their present status of CFD (Computational Fluid Dynamics) analysis and designing case studies of fans, and how to effectively utilize simulation results. The company is known for fan motors used in specialized products such as "super computers".

Oriental Motor is a development company of a large variety of motor products such as precision miniature motors, and total systems including control circuit for fans. They provide products to a wide range of areas: industrial machineries, laboratory devices, and medical devices. In the company, TM (thermal management) department is in charge of thermal management, which is mainly for developing fan motors. The department proposes new propeller fans, blowers, and cross-flow fans for general electronic appliances such as personal computers, and also total systems for thermal management. One of their best products is fan motors for specialized products such as super computers. The company has long established a system for rapidly developing and manufacturing high-mix low-volume products. That know-how is utilized in the development of fan motors, too.

Fluid engineering has been utilized for analyzing various types of blades for many years, especially for analyzing large scale products such as screws for marine vessels and blades for windmills. Although heavy industry companies manufacturing these large scale products generally developed their own analysis programs, fluid analysis of fans for electronic devices has lagged behind them. For one thing, the analysis method for a large-scale blade cannot be simply applied to the analysis for electronic devices. Normally, fluid over a blade does not flow along the blade, slightly separating from the blade. The conditions or states of fluids separating from a blade are widely different between a small size fan (a few centimeters in diameter) and a large-scale blower (nearly one meter in diameter). Thus, for design engineers of fluidic devices, these fans seem to be in completely different dimensions. Also, for many electronics manufacturers, a fan was just a single component of an electric device, so they could not afford to invest their time and money just for a fan design. Therefore, most design engineers had to repeat trial and error themselves and largely depended on their experiences for the fan design and development, and thermal management using a fan.

Under these circumstances, there was almost no research paper on this topic when Takahiro Ito, senior researcher of TM department of Oriental motor, started to work on fan designing in 1988. 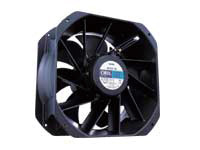 Development of a Fan for "Earth Simulator"

Mr. Ito is an expert of fan development. One of the products he developed at Oriental Motor is a fan for "Earth Simulator" (see reference.1), which is utilized for a climate prediction by Japan Agency for Marine-Earth Science and Technology. Approximately 400 computers, each of them sized 100 ×140×200 centimeters, are located in a spacious machine room like a gymnasium. This whole system is called "Earth Simulator". There is an air-conditioning room at the basement where 6 fans are used to pump up the cold air to the above for cooling one computer. Here, overall 2,400 fans are used for the system.

Since a manufacturer of the Earth Simulator stuck to air cooling rather than water cooling, they demanded a fan with extremely high performance. Above all, their demand for countermeasures against the high levels of noise from 2,400 fans was hard to deal with. At that time, Oriental Motor did not use any sound analysis tool, not even a tool for thermo-fluid analysis. Thus, the company used "Rapid Prototyping Machine" to create a prototype with resin, repeating the measurements of the P-Q characteristics and sounds. Generally, several prototypes are enough for the development of standard products of the company; however, they spent six months in creating more than 60 prototypes to develop a fan for the Earth Simulator.

The completed product is 25cm in height and width with forty times more flow rate than a fan for a regular personal computer. At present, they sell the fan as "MRS25" (Fig.1, 2). Now, the fan is widely used for the devices requiring a large amount of wind power such as specialized computers with high calculation efficiency for a semiconductor inspection equipment, and inverters for wind and solar power generation. 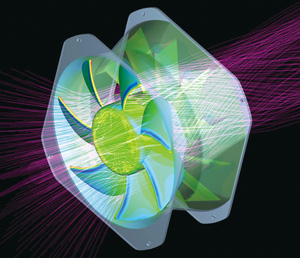 Fig.2 Image of CFD analysis for the product adopted in "Earth Simulator

Introducing Analysis Tool because of the Importance of Visualization

At that time, design engineers of Oriental Motors did not rely on any simulation software to develop a fan for the Earth Simulator. While they gained many valuable experiences through the trial and error process, they went through a lot of troubles for the development and realized the importance of visualizing flow. They could not find out the causes of undesirable results unless they could watch the flow. Ideally, the flow should be measured directly; however, it was not realistic to buy extremely expensive flow measuring devices. Plus, capturing the flow through tiny gaps between blades would be difficult even with the device. Here, Mr. Ito adopted "PHOENICS". The price of the software was reduced to about two million yen at that time. With this software, they gained some achievements in thermal design for electric devices and were appreciated by their customers. Still, it was not efficient enough for analyzing a fan because the mesh lacked smoothness to predict phenomenon over a fan. It was said that meshing took almost two weeks even for specialists, and this was not realistic for many design engineers.

In this situation, Mr. Ito came across "SC/Tetra" developed by Software Cradle, a thermo-fluid analysis software with unstructured grids. When he used the software for the first time, he was quite impressed by the way it generated smooth mesh automatically, without much preparation labor. Since no other set of analysis software came with a mesher that generates unstructured mesh automatically at that time, he decided to adopt SC/Tetra.

With this software, it took only an hour to complete meshing once the boundary conditions and rotating regions were set for a CAD model. Also, the calculation itself did not take longer than two hours.

Analysis conditions can be changed easily, even automatically, to perform analyses for different configurations. Other than fans Mr. Ito is dealing with, particular conditions such as combustion or chemical reaction can be also considered with the software.

At present, they are performing analyses using SC/Tetra while making prototypes of new fans. They measure the P-Q characteristics of fans created by Rapid Proto Typing with a dedicated device, and confirm the characteristic differences through simulations. Then, the level and type of noise are analyzed with a special microphone in an anechoic chamber, and the data is used to reconsider the fan shape.

"An advantage of a simulation is that we can rethink our belief about a flow pattern." says Mr. Ito. He has experienced that a comparison between CFD simulations and experimental results brings new ideas for a better product. 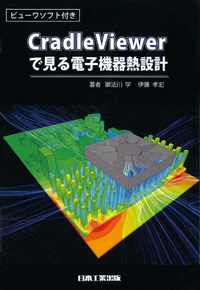 Necessity to Learn How to Get Along with Simulation

Meanwhile, a thermo-fluid analysis by its nature causes certain errors because of uncertainties: a numerical scheme usually gives an approximate solution, and the complete modeling of an actual product or a phenomenon is impossible. Still, simulations are considerably effective to reduce fatal design errors. Mr. Ito says "One of the great advantages of utilizing simulation software is to spare valuable time to address new challenges by reducing production rework from design errors." However, he is still struggling to make related departments understand these advantages of CFD software products. For instance, circuit design engineers determine various specs like a voltage by fractions. Therefore, they tend to believe the exact value of heat should be output once the conditions are determined. However, thermal issues are "hard to predict" for engineers dealing with heat problems. Mr. Ito says "It's like a perception gap between digital and analog ways of thinking." Even though design engineers cannot predict the exact temperature, they can fully avoid production reworks through prior simulations. He hopes that more engineers will understand the characteristics of CFD analysis and take full advantage of simulations.

Based on these experiences, Mr. Ito published "Thermal design for electronics through CradleViewer" (Fig.3). The book is filled with practical knowhow on thermo-fluid analysis, and the accompanied CD-ROM helps users learn the practical thermal design for electronic devices including fans (Fig.4). He wrote this book to allow general engineers (not CFD experts) to visualize the flow in a way closer to the real flow. Also, design engineers can easily try dynamic designs with simulations, and create a prototype of a new product without time and money. Furthermore, simulations can help engineers narrow down their design ideas. For instance, proximity to a part generating high amount of heat can cause crucial errors in the layout of electronic parts. Here, such crucial errors can be predicted by performing a simulation in advance. Simulations are absolutely necessary for eliminating preventable design mistakes. 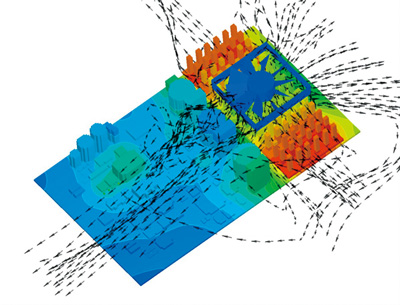 "CradleViewer" is a free software which enables users to see calculation results of SC/Tetra and "HEAT Designer" (thermo-fluid analysis software designated for electronics) provided by Software Cradle. Users can easily see images and animations in desired angles and scales. Now, analysis results can be confirmed under environments other than specified computers in which the analysis software is installed. A specific visual that is saved in SC/Tetra can be reproduced just by loading a file into CradleViewer.

This software product also encourages communication between different departments. If you need to explain the necessity of expensive components for a thermal management, for example, the explanation only in words may not be persuasive enough to a person from a purchasing department. Here, if you show a simulation result, you will immediately make the person understand the "necessity of expensive components because a prominent temperature rise is predictable." Otherwise, he/she may give you the information of much better components. You can also explain people at assembly lines the necessity of special consideration before assembling parts of a specific position to avoid thermal problems based on the simulation results.

Acoustic simulation is their next target. Since the simulation requires even more detailed mesh than the analysis of heat or flow only, the calculation requires a considerably long time even with a super computer. It is even more difficult to perform the simulation with a normal, desktop computer. Now they are looking for other ways to achieve the acoustic simulation in collaboration with universities. Mr. Ito hopes, "If some index related to the sound is formulated, calculations may be performed with a normal computer with a basic specification. If this happens, it would bring innovation to a wide range of areas including electronics."

Mr. Ito admits, "Experiences with failure are crucial for the development of a new product."

Meanwhile, the good use of simulation tools will reduce production reworks and will provide adequate time for design engineers to perform constructive analyses. It would also benefit the engineers in utilizing the results in many other applications. He concludes that a better understanding about the effectiveness of the analysis tool and the full utilization of the tool are really important.

*All product and service names mentioned are registered trademarks or trademarks of their respective companies.
*Contents and specifications of products are as of May 16, 2011 and subject to change without notice. We shall not be held liable for any errors in figures and pictures, or any typographical errors.