PICLS is a computational thermal analysis tool designed for PCB (printed circuit board) design engineers, who may have little experience with numerical analyses. Intended for simple and quick execution of thermal analyses, PICLS uses an intuitive two-dimensional interface that combines the Preprocessor for controlling analysis model settings and Postprocessor for displaying results into one. The goal was “to create greater benefit for PCB design engineers by allowing them to evaluate thermal design ideas easily on the spot.” Jun Eto from the Cradle Software Engineering Department provides a detailed account of the development. 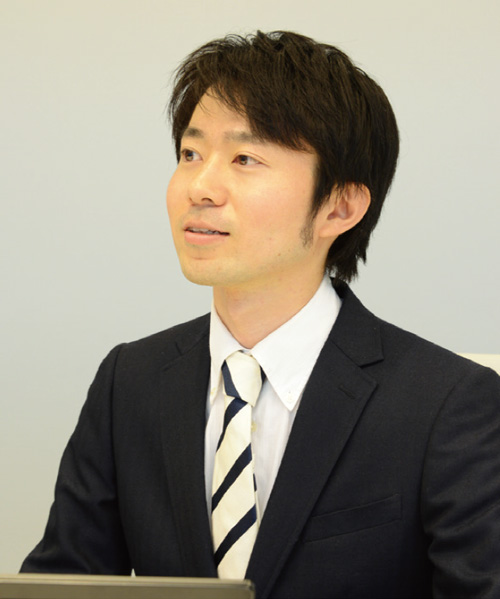 
Why did you focus on thermal design of PCBs?

Our customers have been telling us that device specifications are becoming more and more complicated in terms of thermal design. For example, many electronic component devices today are completely sealed or highly miniaturized. From correspondence with our customers, we recognized the need to improve the thermal design of PCBs, as well as the thermal performance of the overall device. In response to customer requests to facilitate modeling PCBs, specialized functions that can calculate equivalent model and import Gerber data have already been implemented into scSTREAM and HeatDesigner. Even so, scSTREAM and HeatDesigner are normally used for analyzing overall devices or systems, and a separate, fast and easy to use PCB thermal analysis tool would be a great support.

Some of our customers have voiced this exact concern when using scSTREAM or HeatDesigner to perform PCB thermal analysis. They were satisfied with the software capabilities but both scSTREAM and HeatDesigner are fully functional CFD (Computational Fluid Dynamics) software and users must possess the requisite skills. Thermal fluid software like scSTREAM and HeatDesigner appear to be too advanced for non-experts even in terms of thinking in 3D. The majority of PCB design engineers are not familiar with 3D operations. In addition, CFD computations take time to generate results. When we began to realize the gap between what PCB designers need and what traditional CFD software solutions offer, we decided to ask our customers to help define the requirements for a tool that PCB design engineers could easily use for PCB thermal analysis.

From the discussions with our customers, the requirements of the tool gradually became clear. These were:
1) Simple model generation
2) Seamless processing of analysis results, and
3) Real-time views of heat transfer and changes in temperature distribution.
Clearly, the tool must satisfy all three conditions to convince design PCB engineers of its value. 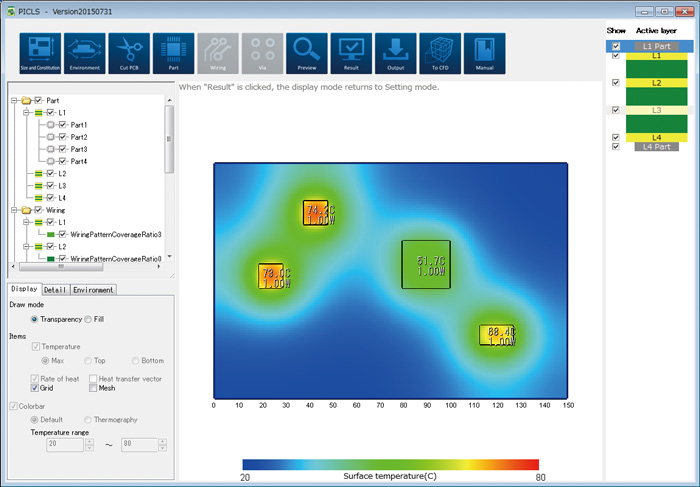 
We learned that the biggest problem PCB design engineers faced was identifying how much the temperature would change after re-allocating components. To solve this problem, we focused our efforts on ways to enable the engineers to freely allocate components on the PCB and easily assess thermal design potential through thermal analyses. This became the chief development objective of this new tool. 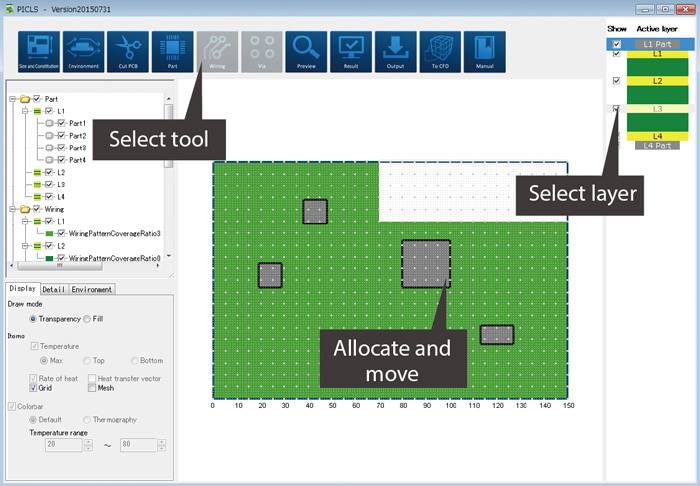 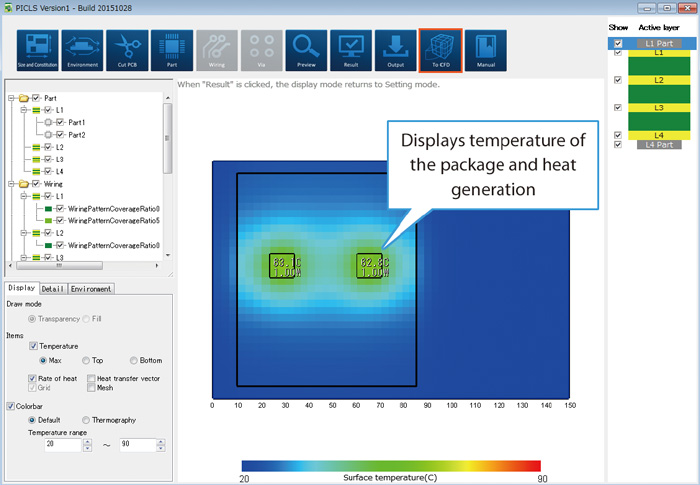 
What can be evaluated using PICLS?

Many of you have probably heard of ‘front-loading.’ 'Front-loading' means evaluating more thermal designs early in the design cycle, especially during conceptual design. Being able to theoretically assess design efficiency at this stage of the process is advantageous because it is still easy to modify the design at this time. The notion of 'front-loading' is popular, but it is rare to see it perfectly systematized in real situations.

As an example, a component on a PCB can be overheated by the heat from surrounding components. This is called thermal interference. Often PCB design engineers have a sense about how components could be re-allocated to improve a design if needed, but they don't have any way to quickly know whether a change is necessary. They must either rely on their experience and instinct or ask CAE analysts to conduct thermal analyses. The project team realized that developing an analytical tool that enables real-time PCB thermal analyses would solve this problem.

PICLS can be used to examine component layouts on a PCB that reduce thermal interference. Naturally, the wider the gap between components, the lower the temperature. However, the challenge is to determine the minimum separation distances needed to achieve acceptable temperatures. Using PICLS, the design engineers can parametrically assess temperature changes as a function of separation distances in millimeters. PICLS is also able to check thermal interference between components on both component and soldered faces, which can be difficult to detect. PICLS reduces the risk of submitting thermally inappropriate layouts for detailed system level CFD thermal analyses later in the process.

In order to develop a viable thermal analysis tool for PCB design engineers, we continuously collected their opinions and feedback during the PICLS development process. This enabled us to understand how countermeasures against thermal problems can be implemented in the early design phases.

We asked our customers to actually design and manufacture PCBs so we could validate the simulation's accuracy. We also joined their PCB design team to experience the entire production process. We attended PCB lectures and learned how to place wire inputs and how to mount devices. This was worthwhile research and enabled us to identify the software characteristics and requirements that would satisfy a wide range of customers.

Early in the PICLS development process we had to consider how to retain the strengths of the existing scSTREAM and HeatDesigner tools while reinforcing the potential extensibility.

In theory, the concept of creating a simple simulation tool while providing extensibility is an oxymoron. We explored new ways to achieve both capabilities. This was a new challenge for the project team. After much deliberation, we realized we needed to develop a completely new thermal analysis software from scratch, rather than using existing fluid analysis software methods and simply eliminating the fluid analysis capability.

In the past, we have developed complementary custom software as requested by our customers. These include a thermal analysis system that uses VBA (Visual Basic for Applications). However, we realized that this level of customization, would not be sufficient to fully engage the PCB design engineers. We had a clear vision of the ideal software: one that would be capable of intuitive operation and fast procession.

The PICLS development project was definitely challenging. We continuously sought input from our developers to ensure our expectations for the tool were realistic and achievable. We needed to maintain our determination and commitment to carry out the development until we achieved the goal.

When constructing the details of the user interface, my objective was to create an interface operation that closely resembled ECAD. I thought the PCB design engineers would be more comfortable with the tool if they could intuitively create models using simple shapes such as rectangles. Frequent visits with our customers and observing the actual PCB design processes were helpful. We made improvements that simplified the analysis model generation process from discussions with our customers.

Model generation is performed using 2D operations. The process is simple: select the layer you will work on, then select and allocate components such as wirings and vias. Mesh generation, solver calculations, and postprocessor execution are all automatic.

PCB engineers can re-allocate components and wirings and make any other changes. Then they can immediately observe the analysis results. Changes to the temperatures are reflected in real-time. This enables the engineers to evaluate the effects immediately (Fig 4). Just clicking the output button generates an analysis reports in HTML format (Fig 5). 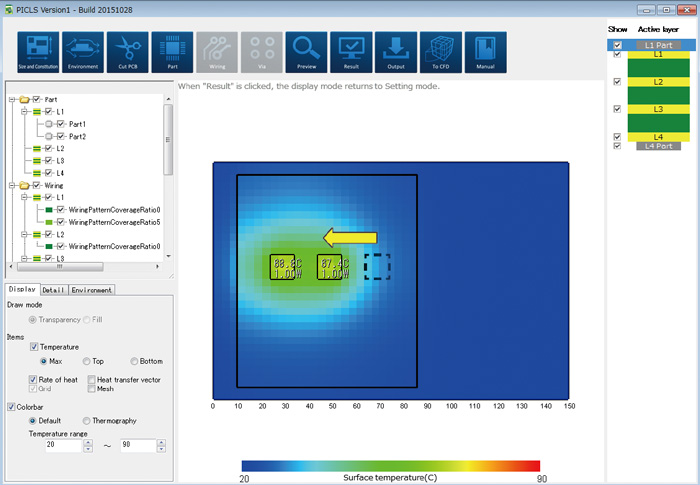 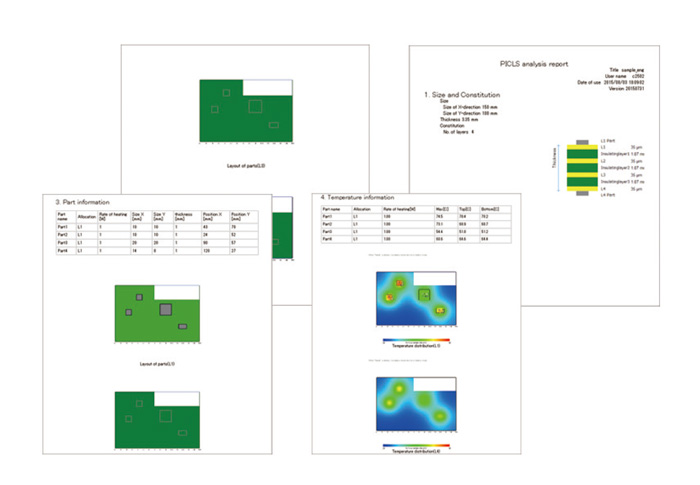 
In addition, visual images can be imported as file I/O to determine component layouts (Fig 6). Output data can be exported as scSTREAM and HeatDesigner library files. Information about the components, wirings, thermal vias, material properties, and heat generation are all seamlessly transferred to system level models in scSTREAM or HeatDesigner.

PICLS is a good example of a thermal analysis tool developed using a needs oriented approach. The voice of the customer was the voice of the PCB design engineers. For PCB designers who have not used the tool, I urge them to try it. You must experience how easy it is to evaluate thermal design ideas using PICLS. PICLS is a product like no other. It is simple for anyone to use and provides real-time analysis results.

As for future developments, PICLS will continue to serve as a tool that enables greater front-loading in the design process. At the same time, we will continue to extend its capability based on customer requests. We hope PICLS helps promote PCB thermal design. We also look forward hearing any requests or suggestions from our PICLS customers.


*All product and service names mentioned are registered trademarks or trademarks of their respective companies.
*Contents and specifications of products are as of July 1, 2015 and subject to change without notice. We shall not be held liable for any errors in figures and pictures, or any typographical errors.