Case Study – Learn about Thermo-Fluid Analyses Optimization No. 6: Search for a shape with minimum fluid drag (3)

Search for a shape with minimum fluid drag (3)

In the previous column, the overview of condition setting and design of experiments using EOopti are described. In this column, we search for a shape with which drag force becomes the minimum with the Reynolds number 650.

Perform a CFD analysis using a model created based on a design of experiments with EOopti, and obtain a drag coefficient. Calculate cross-section area ratio and input the obtained results in EOopti as shown in Figure 3.1. 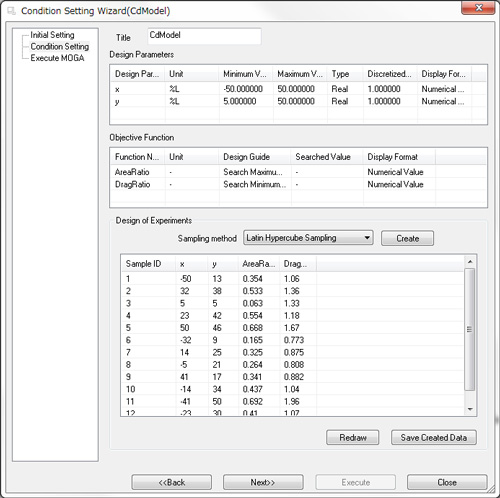 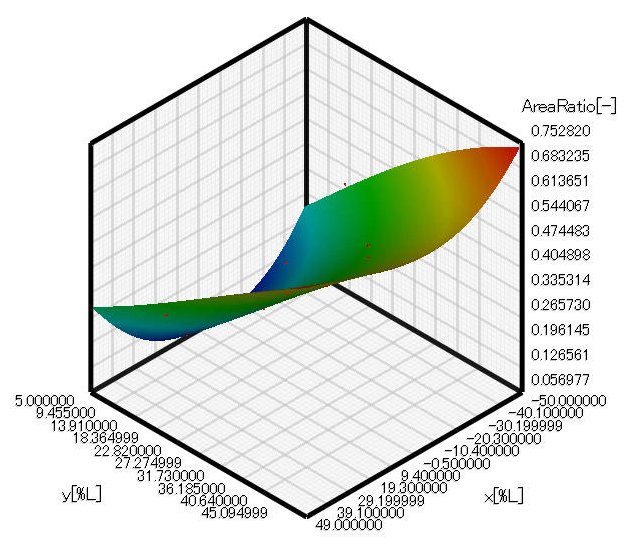 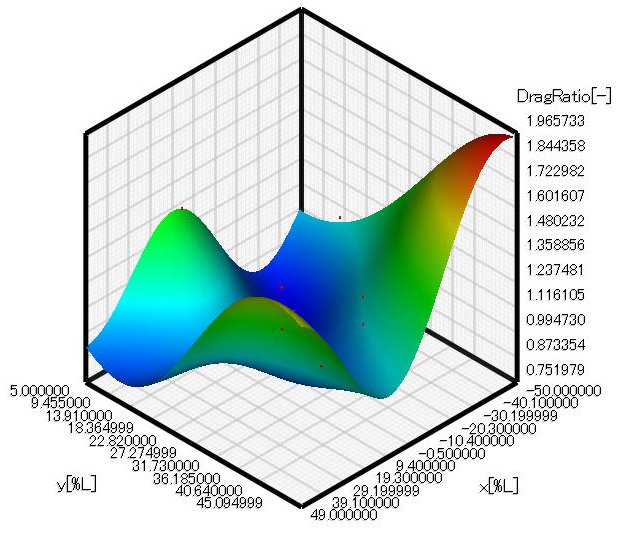 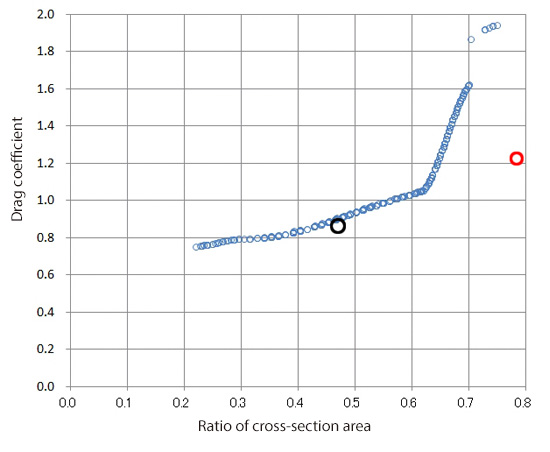 
To find the shape with which solutions become optimal, X and Y coordinates of the intermediate point of the optimal solutions are plotted. (Figure 3.6) In the figure, blue circles indicate the locations of the intermediate point of the optimal solutions while red circles indicate those of the worst solutions. When the X coordinate of the intermediate point is around the center of the object and the Y coordinate is set at approximately 30% of the representative length, the shape with which cross-section area ratio is large and drag coefficient is small is obtained. Then, an elliptic cylinder whose short axis is 60% of its long axis is created as a proposed optimal shape and the drag coefficient is analyzed. (See Figure 3.7.) Cross-section area ratio and the drag force are indicated by the black circle in Figure 3.4 and the drag coefficient is about 2/3 of the cylinder. Thus, the drag coefficient of an elliptic cylinder whose short axis is equal to the diameter of the circular cylinder and long axis is 5/3 of the diameter of the circular cylinder is approximately 2/3 of the drag coefficient of the circular cylinder. Drag force is proportional to the square of velocity. If the cross-section area in the flow direction and a force required for moving are proportional to each other, when compared to the circular cylinder, the elliptic cylinder can move

Figure 3.8 shows velocity distribution with the proposed optimal shape while Figure 3.9 shows pressure distribution for the same. In Figure 3.8, wake flow is generated at the rear of the elliptic cylinder and the width of the wake is the same as that of the elliptic cylinder. This means that the shape of the object’s rear part does not significantly affect the flow. In other words, drag force does not greatly differ between the optimal shape and the worst shape. In Figure 3.9, positive pressure can be seen in the flow of the object’s front side and the impinging point, and negative pressure occurs at the rear of the object. This force, by which the object is pulled in the flow direction due to the negative pressure, is the profile drag described in No.4 Search for an object shape with the minimum drag force against a fluid (1).

Figure 3.6: Position of the intermediate point to give optimal solutions 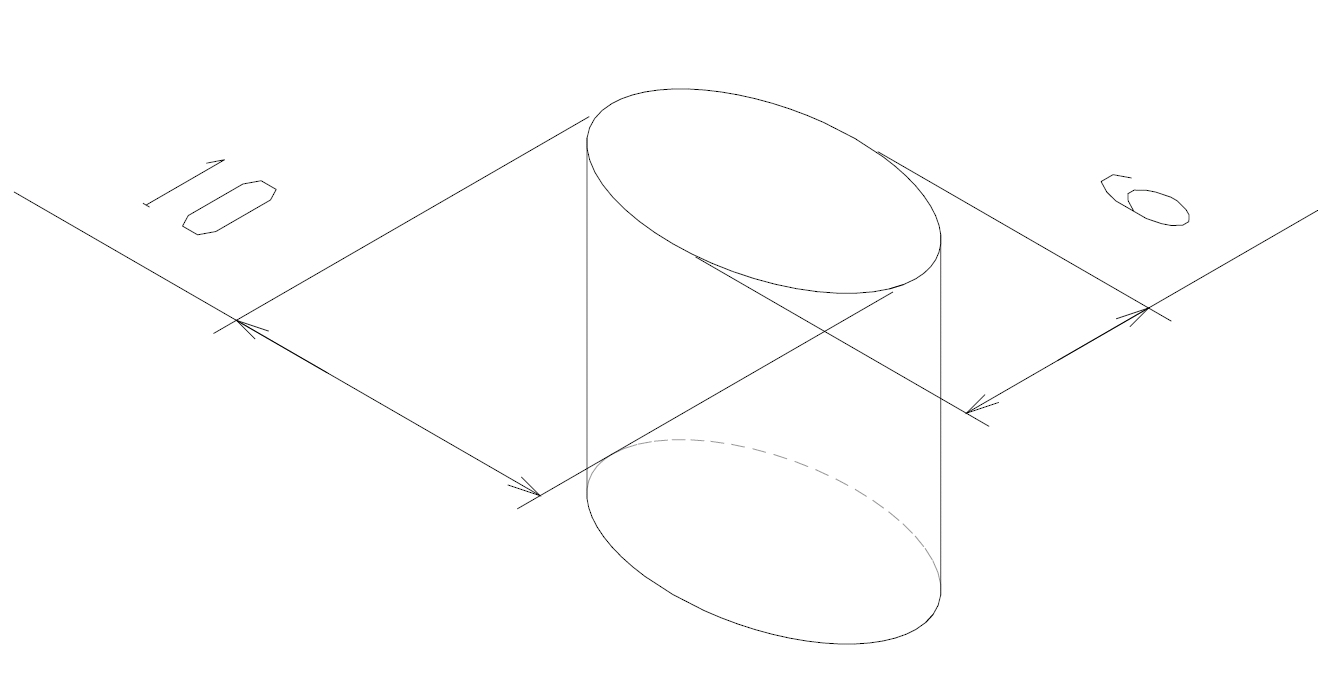 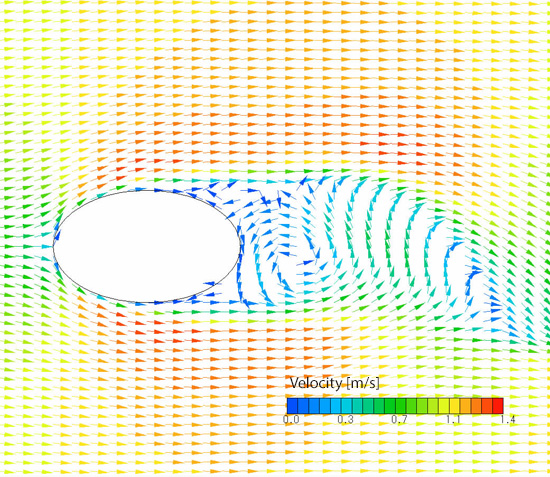 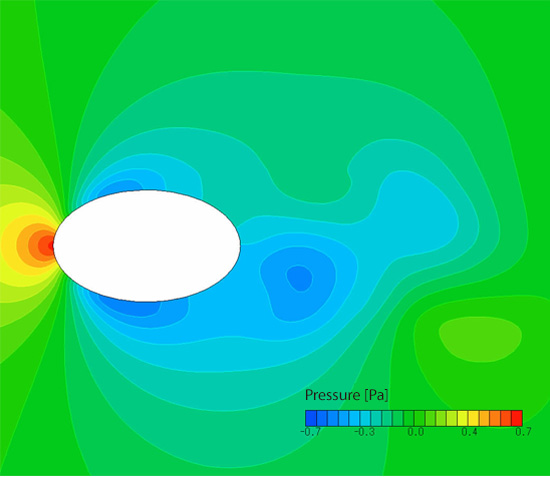 
The next column will explain about optimal solutions when Reynolds number is 650,000.