Case Study – Learn about Thermo-Fluid Analyses Optimization No. 5: Search for a shape with minimum fluid drag (2)

Search for a shape with minimum fluid drag (2)

In this column, we create the model. Before the creation, we will examine velocity and representative length.

First of all, perform an analysis with a cylinder model to check the analysis field. The coordinate conversion of SC/Tetra is used to change the model size. Create a medium-size model, i.e., the representative length is 100 mm. Then, as the entire flow field region, create an enclosure whose upstream and downstream lengths and widths are ten times as long as the representative length. (See Figure 2.1) The height is set to 100 mm. This is the value that SC/Tetra recognizes the analysis as two-dimensional. Create the model with CAD and load the obtained 3D shape in SC/Tetra. Then, define INLET, SURFACE, and OUTLET as boundary conditions. (See Figure 2.1) Save them as a model. When Re = 650, scale down the model to one-tenth and set a boundary condition of INLET to 1 m/s of velocity. On the other hand, when Re = 650,000, scale up the model by a factor of ten and set a boundary condition of INLET to 10 m/s of velocity. 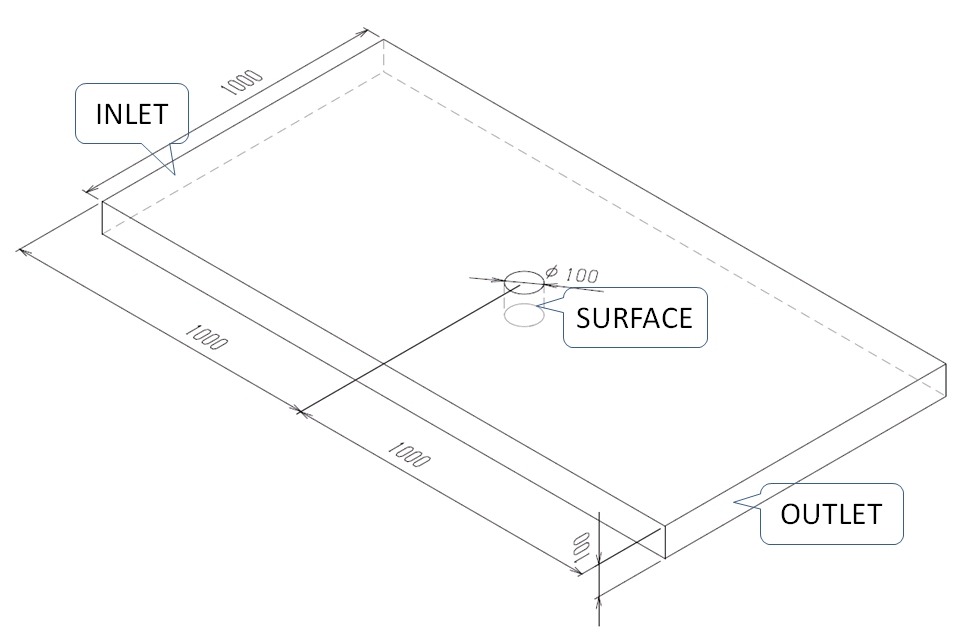 
Perform the calculation as a two-dimensional analysis using Adaptive Mesh Refinement method with these conditions. The results are shown in Figure 2.2 and 2.3. Figure 2.2 is a velocity distribution map with Re = 650 while Figure 2.3 is the map with Re = 650,000. Drag coefficient (CD) when Re = 650 is 1.22 while it is 0.42 when Re = 650,000. The results almost agree with the data in JSME (The Japan Society of Mechanical Engineers) Mechanical Engineers' Handbook (only in Japanese) and appropriate for an analysis. Then, change the name of the condition setting file (S file) and model name. Use them in the analysis setting of the cylinder whose cross section has an arbitrary shape. You can increase the work efficiency and avoid input errors by the name change. 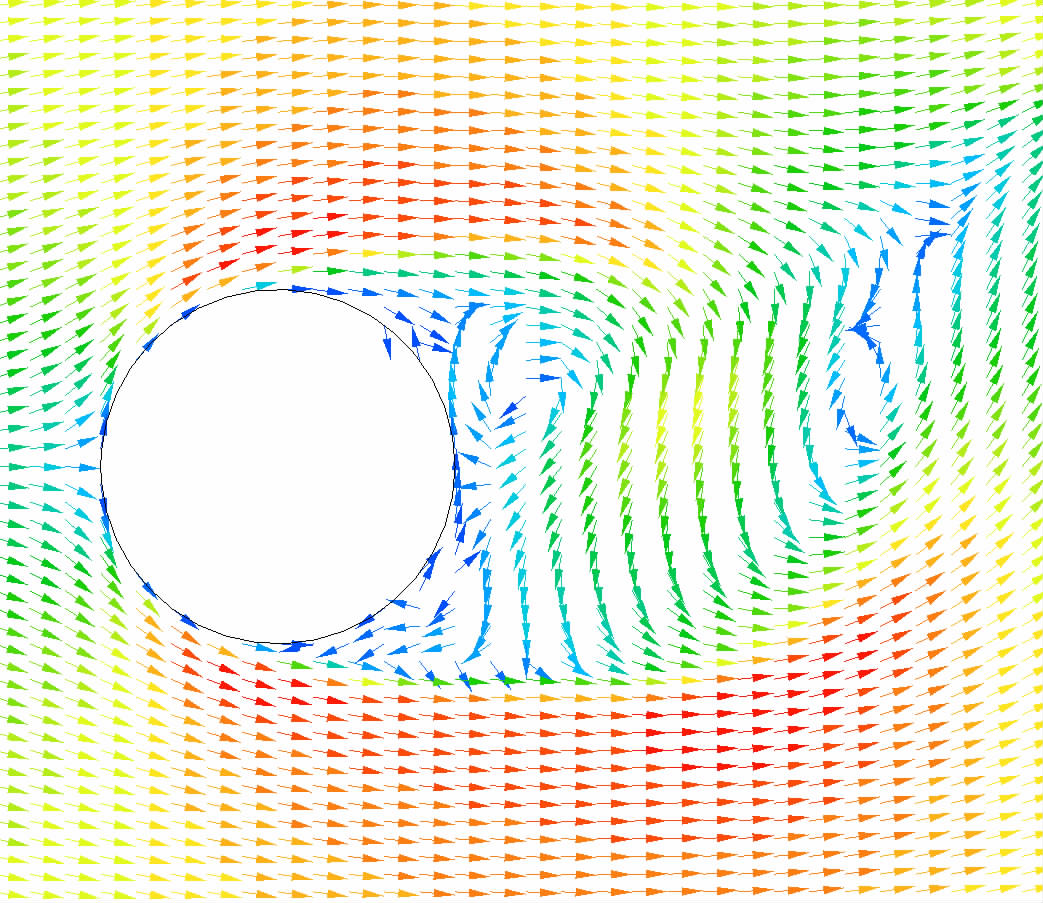 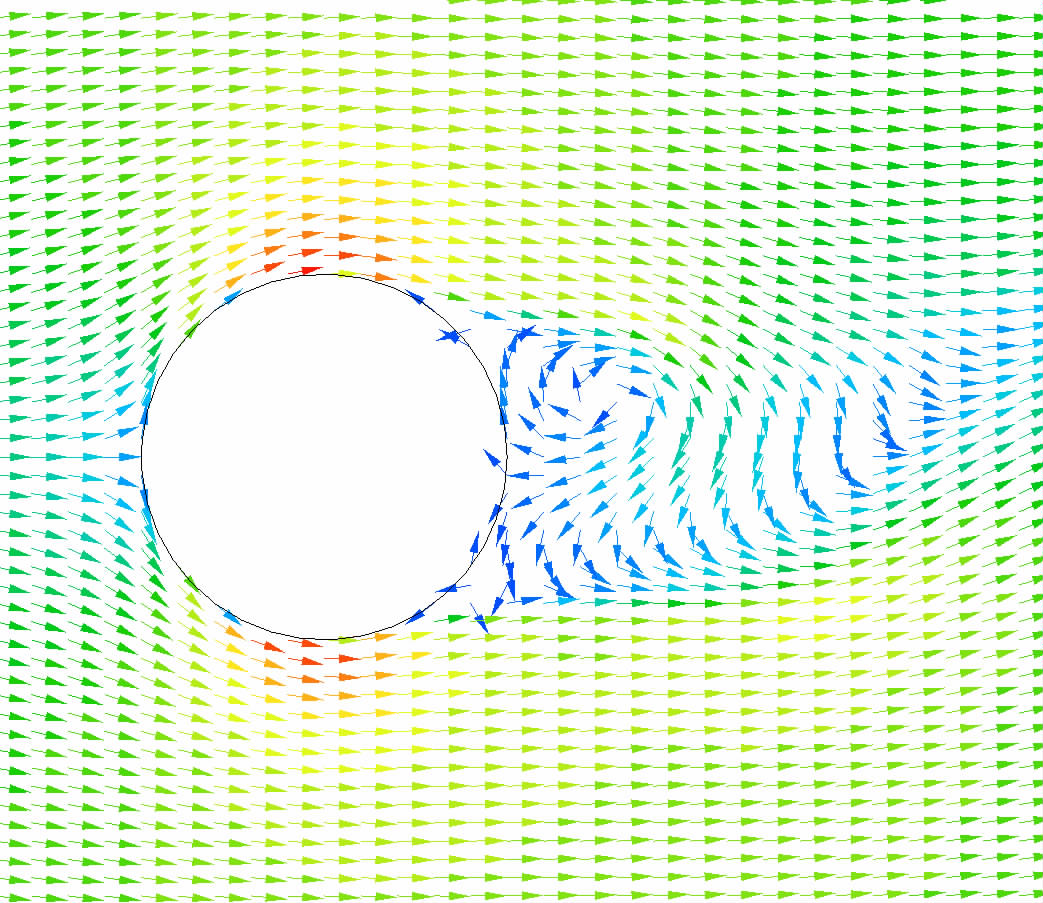 
Next, create a cylinder model whose cross section has an arbitrary shape. Design variables are X and Y coordinates of an intermediate point (two variables). Therefore, the number of samples is (2 + 1)·(2 + 2) = 12. X coordinate ranges from −50 to 50 and Y coordinate from 10 to 50. Optimal solutions are searched for with EOopti. The procedure is done in the dialog shown in Figure 2.4. 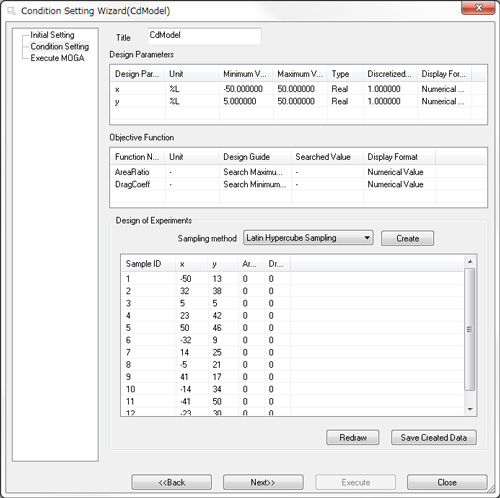 
Save the values in CSV format. Then, draw a spline curve with the intermediate point whose X and Y coordinates have been designed above, and create a CAD model. Calculate cross-section area and its ratio to the area of a square. This is the objective function AreaRatio shown in Figure 2.4. Next, create a model with SC/Tetra and prepare models and S files for Re = 650 and 650,000 in the same manner as that of the cylinder calculation. Then, perform an analysis using Adaptive Mesh Refinement method. Calculate drag coefficient from the obtained result. This is the objective function DragCoeff in Figure 2.4. Repeat the procedure as many times as the number of samples and input the obtained result in an appropriate space in the dialog (Figure 2.4).

The next column will explain about optimal solutions when Reynolds number is 650.