We will discuss ‘hybrid model’ in this column. We have discussed three methods of turbulent flow calculation: DNS, RANS, and LES. DNS is a method only applicable to researches, and even LES has a computational load that is often too high to be practically usable. Thereupon ‘hybrid model’ was invented by combining RANS and LES. A hybrid model is a method to calculate some portion of computational domain with RANS model and the rest with LES. The intension of this is to calculate the portion of high computational load with RANS so that the total computational load is reduced, while retaining the advantages of LES. There are several hybrid models with different calculation methods. We will discuss Detached Eddy Simulation (DES) and Very Large Eddy Simulation (VLES) below.

The words ‘Detached Eddy’ stand for an ‘eddy that is apart from walls’. Eddies in turbulent flows are generated due to velocity gradient, and a wall is one of the places where eddies are generated. An eddy is generated due to velocity gradient, which is created by the presence of a wall, and drifts on the flow away from the wall; that is ‘Detached Eddy’ (Figure 14.1). DES is mainly designed to calculate this sort of eddies apart from walls. On the other hand, DES does not calculate small eddies near walls directly but calculates only the averaged field using RANS model. By doing so, mesh can be made coarse near walls where otherwise the finest mesh is required, which reduces the computational load compared to LES. It has been commented, however, that DES may not be capable of simulating the most important portion, namely the places for generation of eddies, because it relies on RANS near walls. 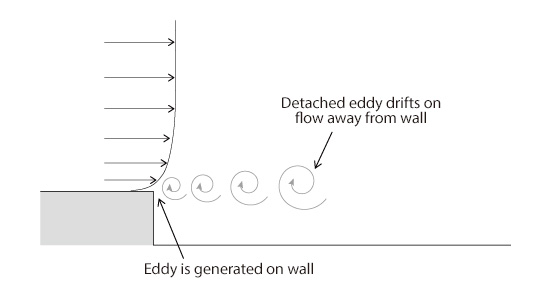 The words ‘Very Large Eddy’ stand for the concept of calculating only very large eddies among eddies calculated in LES. The basic way of thinking is the same as that of DES; RANS model is used for the calculation near walls, where LES requires finer mesh, and the rest is calculated with LES. The switching methods between RANS and LES, however, are different. We will learn two methods here. The first method is the one that uses a space filter proposed by Ruprecht and others. As shown in Figure 14.3, this method applies a mesh-sized filter to the turbulent energy calculated in RANS equations, and calculates eddy viscosity by using only the turbulent energy left after filtering, i.e., only the turbulent energy regarding the eddies smaller than mesh size. This process restrains eddy viscosity acting on large eddies that can be captured with the mesh size and makes it possible to capture (unsteady) vortex motions within that size. 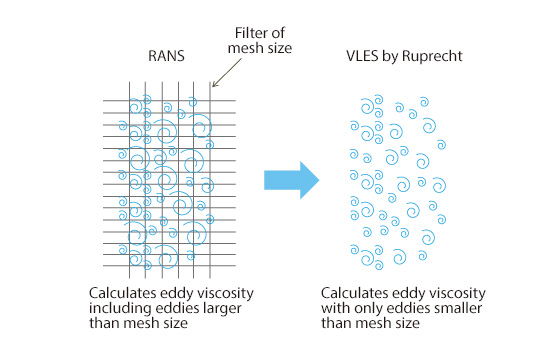 Figure 14.3: VLES by Ruprecht and others

where, Cμ and CS are model constants, ρ is fluid density,

Figure 14.4: VLES by Batten and others

In the next column, we will discuss sample calculations of hybrid model.