Here is an analysis example. Natural ice made in a water pond in winter is analyzed. It is said that natural ice grows from the water surface of a water pond when cold air remains for about 20 days and the thickness that can be cut becomes 15 cm or more. To see if it can be reproduced, solidification/melting analysis is conducted.

As shown in Figure 2, a water pond with length of 24 m, width of 14 m, and depth of 0.5 m is considered. The pond is surrounded by curb stones and organic soil. The ambient temperature of the upper surface of the pond is -8° C, and the coefficient of heat transfer is 10 W/(m2 K). The temperature of the under surface of the pond is 4° C, which is a heat conduction condition. Under this condition, unsteady analysis for 20 days is conducted. The flow of water is not solved. 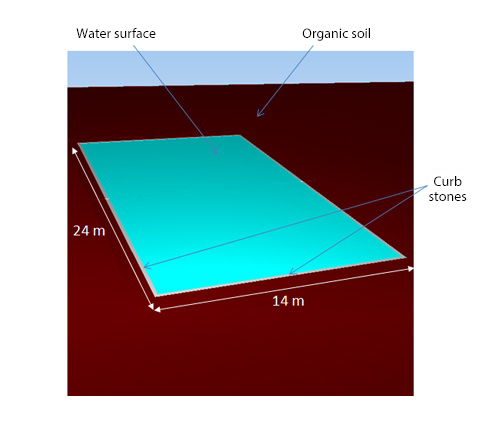