This article introduces another example of dew condensation/evaporation analysis.

When you want to analyze dew condensation and evaporation on a wall surface of a solid such as a window inside the house or a defroster, the amount of vapor in the air, i.e., humidity, can be considered, and dew condensation and evaporation can be calculated based on the difference between absolute humidity in the air near the wall surface and absolute humidity at saturation at the wall temperature. However, when you analyze moisture absorption and desorption of a solid such as a humidity-controlling material (or humidity conditioner), you need to set the moisture absorption/desorption properties of the solid.

Figure 1 shows an example of a solid with voids, or a porous medium. Moisture in a solid transfers when water permeates in the solid and water vapor diffuses. When the relative humidity inside a solid is 98% or smaller, it is assumed that the form of moisture transfer is water vapor diffusion, and moisture conductivity of the solid is set as one of its material properties. In addition, moisture transfer between a solid surface and air is approximated by calculating the moisture transfer coefficient from the heat transfer coefficient of convection between the solid surface and the fluid using the Lewis number Le, which is a dimensionless number defined as the ratio of transfer speed between heat and mass. This is called the Lewis relation.

Figure 1: Humidity in a solid


At the same time of moisture transfer in a solid, a phase change between water vapor and water occurs inside the solid as shown in Figure 2. Water vapor condenses into water and water evaporates and changes to water vapor. Since heat generation and absorption corresponding to latent heat due to the phase change affects the phenomenon, transfer of moisture and heat in the solid requires to be simulated in a coupled analysis. For the coupled analysis, the amount of moisture required to change the humidity of the solid (absolute humidity) and the amount of moisture required to change the temperature of the solid are set as the moisture absorption/desorption properties of the solid.

Figure 2: Moisture absorption/desorption in a solid

As shown in Figure 3, the analysis target is the inside of a bathroom. A bar is horizontally installed near the ceiling, and a piece of laundry is hung on it. The piece of the laundry is 126 cm long by 60 cm wide by 1 cm thick. Its porosity in the dry state is 0.4, the apparent density with the consideration of the porosity is 1.30 kg/m3, the specific heat is 1.15 kJ/(kg∙K), and the thermal conductivity is 0.086 W/(m∙K). The moisture conductivity is 5.0×10-6 kg/(m∙s(kg/kgDA)), the amount of moisture required to vary the absolute humidity is 5.0×103 kg/(m3 (kg/kgDA)), and the amount of moisture required to vary the temperature is 2.5 kg/(m3 ∙K). Note that (kg/kgDA) is the unit of absolute humidity and DA stands for dry air. 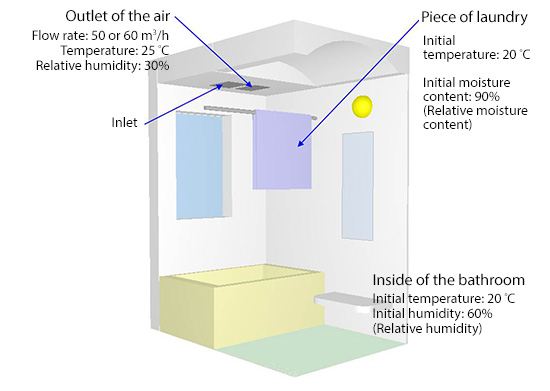 Figure 6 shows the time variation of temperature distribution on the laundry surface and a cross section of the bathroom when the flow rate of the air from the outlet is increased to 60 m3 /h, while Figure 7 shows the time variation of relative humidity on the laundry surface with the same flow rate as Figure 6. Figure 7 indicates that larger flow rate of the air helps the laundry dry faster. Note that the animation speed of Figures 4 to 6 is 600 times faster than real time.