Kanto Seiki develops and manufactures high-precision liquid temperature regulators for various industrial machine tools. Driven by its mission "We stand behind the brand", Kanto Seiki is regarded as a highly-trusted company that provides solutions for ultimate temperature control required by high-precision machining centers and semiconductor exposure equipment. To gain further insight regarding how heat is generated, the company uses scSTREAM, a general purpose thermo-fluid analysis software. 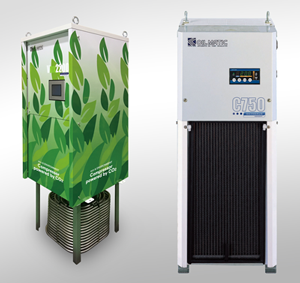 
High-precision liquid temperature regulators developed and manufactured by Kanto Seiki are widely used in various production sites both domestically and internationally. The company also offer factory automation systems including those for handling and transportation of machines. One of their flagship products is “OILMATIC” (Picture 1), an automatic liquid temperature regulator used in various industrial machines such as machine tool. Temperature regulators are generally referred to as “chillers”, but because the brand name OILMATIC has made inroads in the industry, it is not uncommon for similar products by other manufacturers to use this name in many production sites around the world.

Kanto Seiki originally started as a metal processing company, and the objective of suppressing thermal displacement lead them to pursue the development of temperature regulators for hydraulic oil used in machine tools. In 1965, they released the product under the brand name “OILMATIC”, and ever since then, it has achieved widespread use driven by the trend of increasing speed, precision, and numerical control in machine tools. Currently, they offer many other products including automatic mold temperature control machine “MOLDMATIC”, automatic water/pure water temperature regulator “PUREMATIC”, and for research institutes, super low temperature regulator “ICEMATIC”. Recently, the company has been focusing on environmental friendly developments and high efficiency designs. Most notably we see the industry’s first adoption of carbon dioxide refrigerants instead of chlorofluorocarbon (CFC) in OILMATIC along with ongoing efforts in the development of energy saving equipment.

The strongest competitive advantage they have as liquid temperature regulator professionals in the manufacturing field is the ability to provide finely tuned and customized products that meet end-user demands. Most of their products are tailor-made and provided with the most suitable specifications according to user requirements. Their responses and solutions to meet end-users demands including temperature control features, machine forms that are easy to install on site, and module type structures that can be quickly replaced in the event of a fault have received very high acclaim within the industries.

Kanto Seiki implements the thermo-fluid simulation software scSTREAM in their study and analysis to solve various thermal problems. Mr. Namiki (Picture 2) explains, “Simply providing cooling features is not the end goal of our products. We are always aiming to achieve high cooling effects and energy savings all while meeting our customers’ requirements. This is where we use simulation. 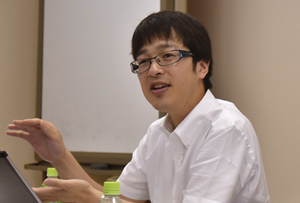 
An example of this is the analysis of cooling water flowing through a press mold. A client designed a cylindrically shaped mold to be used for material extrusion molding. Although lubricant is applied to the material, molding will be performed several times, so the rise in temperature caused by the heat generated by plastic deformation cannot be avoided. This is why a structure to allow cooling water to flow is incorporated in the mold. However, they noticed that the cooling effect was not sufficient enough, reducing the effect of lubricant. To figure out the most effective flow passage for cooling water, they used scSTREAM to perform the analysis.

Analysis proved that the cooling effect was reduced because the section where cooling water flows and the section where heat is generated (Figure 1). It was also evident that the temperature of the section indicated in red exceeded 200 °C. Further looking at the flow velocity distribution in analysis results, they also identified that, although cooling water surrounds the mold in a cylindrical shape, the flow is not even, and the flow is greater in some areas than others (Figure 2).

Mr. Namiki explains, “With traditional methods using manual calculation, it is difficult to identify the actual water flow within the design. I was personally surprised with the analysis results showing that the unevenness in the flow was more significant than expected. Based on these results, we gave further advice to the client about their design. To be able to offer in- depth advice like this is our competitive advantage.”

Studying Heat Exchangers and Exhaust Heat for the Entire Machine

Kanto Seiki is also pursuing to use scSTREAM in their analysis of heat exchangers built into their products. Within heat exchangers, the CFC refrigerant and liquid to be cooled are separated with a thin metal. Controlling the pressure and temperature of CFC through a refrigerating cycle cools down the flowing liquid. Also, increasing heat exchange efficiency will allow the machine size to be smaller.

To figure out the conditions that can increase thermal efficiency, Kanto Seiki again used scSTREAM. The flow passages of both the refrigerant and liquid to be cooled are important in achieving such efficiency. As with the previous press mold analysis example, unevenness in the flow will reduce the efficiency of heat exchange.

Mr. Namiki points out, “The size of a heat exchanger can be fairly large, enough to determine the entire size of the machine. This means that increasing thermal efficiency leads directly to minimizing the footprint.” Generally, increasing the flow velocity increases efficiency. They are currently analyzing the flow velocity as well as the structure to obtain a design that achieves an even heat flow. 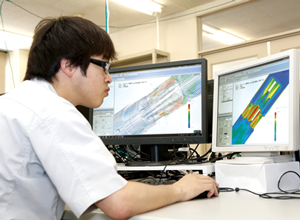 Picture 3: Uniform temperature distribution is ensured within flow passages by mixer
Mixers are used in equipment that requires high-precision temperature control such as optical component manufacturing machines.
Various measures are incorporated into the internal shape.

Kanto Seiki also analyzed mixers to ensure a uniform temperature throughout the flow (Picture 3). A mixer is a cylindrical shaped metal component attached midstream of the flow within tubes. The flow will branch into multiple paths by the cavities provided on the cylindrical component and converge back into a single path to ensure uniform temperatures within the flow.

In the previous press mold analysis example, the looks even section indicated in red seems even on first glance, but a closer look into the plot shows the temperature fluctuation. In some cases, clients demand high accuracy for in the of 0.01 to 0.001°C. For example, the precision control device used in telescope mirrors must suppress the unevenness of the surface to very high levels of 1/1,000,000 mm, requiring the same level of accuracy for temperature control devices respectively. Other examples that require high accuracy include molds for plastic lenses used in smartphones, exposure devices used in area of optics, and multi-task machines used for applications. Kanto Seiki’s OILMATIC Cµ Series, the ultraprecise temperature regulator model, is a product that incorporates such levels of accuracy through using mixers. 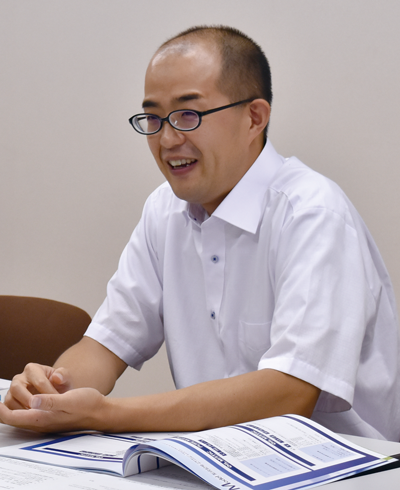 
When studying the flow behavior for initial design of the mixer, they could not see any effect of fluids with different temperatures mixing together even if the liquid flow branched and then collided. Mr. Namiki recalls, “Through analysis, we found out that along with fluid collision, a flow in the opposite direction was required as well. We needed to come up with a structure that will cause the flow to hit the wall.”

Mr. Ono (Picture 4) explains further, “Even if we come up with an idea of a structure that will probably cause fluids to mix, the shape of that structure must be one that can be produced through machining. If we pursue a design that increases the mixing effect, the design will be hard to reproduce through machining, so we also have to consider the balance between workability and temperature homogenization.”

Kanto Seiki also uses scSTREAM to determine the layout of heat generating sections within the machine. Especially compressors that can reach high temperatures. Much the same is true in small components such as motors, pumps, and fans. scSTREAM is used to determine the layout of these components within the machine and enable heat to travel outside.

One of the strongest benefits of using simulation is the ability to easily try out new ideas on a daily basis. They have experienced through using simulation is how easy it has become to try out new ideas on a daily basis. Previously, when they had an idea they wanted to experiment with, they needed to build a prototype of the machine and then perform experiments and evaluations. However, this was difficult due to the time and costs required. Even if it was allowed, any possibility of a re- experiment will easily extend the process up to two or three months.

Using simulation in analysis had a pronounced effect on reducing the development period and cost. Mr. Namiki further explains, “As observing the behavior of heat and flow became possible, our interests and ideas have grown even stronger. A minor detail can be tried and checked with simulation software, without having to create costly molds and conduct experiments that require manpower. Trials that were previously impossible or not realistic have become possible with simulation.”

Although some level of prediction can be accomplished with the traditional manual calculation methods, they say it is limited to approximately 80% of the total design. Kanto Seiki has enhanced their competitive advantage by combining their knowledge and insight accumulated over the many years of study and the power of analysis tools.

One of the benefits of working with scSTREAM is that has the ability to use the Preprocessor, Solver, and Postprocessor independently. Some software has all these features integrated, but they do not allow other tasks to be performed during analysis. This means that it is not possible to setup another model for analysis until the current analysis is finished. Furthermore, you cannot keep the Solver running at all times, so usage efficiency is reduced. One of the benefits of introducing scSTREAM they experienced is that it alleviated simulation more approachable.

Mr. Ono points out, “scSTREAM is capable of displaying analysis results in a variety of ways, which makes it more appealing as a product.” Some examples include, displaying temperature distribution with streamlines. Analysis experts may be able to understand what the results are, however difficultly they are displayed or described, but this is not the case for less- experienced users. Mr. Ono continues, “I can see that scSTREAM is developed to let users easily display information in a variety of ways. This ability is demonstrated especially in presentations.

Mr. Namiki also talks about the support provided by Software Cradle. “Software Cradle has a robust support system. We had some minor questions during our first analysis, but we were able to solve them with their assistance.” When using products by an overseas developer, the local distributor receiving an inquiry may often not have the answer to it, and even if you send the inquiry directly to the software developer, it may take a week to receive the answer. Mr. Namiki adds, “Software Cradle provides much faster response to our questions. This allows us to continue with our work without interruption.”

Currently, only a handful of members are using scSTREAM, but ideally, they want to have all designers to be able to utilize simulation tools into their design operations.

They also have plans to expand the areas of application for scSTREAM. At this point, scSTREAM is mainly used to derive individual suggestions and proposals offered to clients, but they hope to use the software to analyze standard components as well. They anticipate that further insight might be obtained about the already-known facts of the behavior of heat flow. Kanto Seiki continues to pursue a high level of thermal efficiency from the viewpoint of customers. It seems that the day is not far off when an innovative product is created with their usage of simulation.

*All product and service names mentioned are registered trademarks or trademarks of their respective companies.
*Contents and specifications of products are as of July 31, 2017 and subject to change without notice. We shall not be held liable for any errors in figures and pictures, or any typographical errors.