Uncovering the True Nature of the Bluefin Tunas, “the Diamonds of the Sea”

The nature of the bluefin tunas (thunnus orientalis) – large, beautiful fish known as “the diamond of the sea” – is to swim freely in the ocean. This makes close examination difficult, which is why little of their biological characteristics has been explored. Professor Tsutomu Takagi from Kinki University, Faculty of Agriculture, has been applying fluid analysis to reveal the mysterious nature of the bluefin tunas.


The bluefin tunas are the most prized in the tuna family. In 2002, Kinki University succeeded in farm-raising the special fish and named the breed Kindai tunas, which attracted wide public attention.

Professor Takagi from Kinki University (Laboratory of Fisheries Production System, Department of Fisheries, Faculty of Agriculture), explains that the biological data of the bluefin tunas has not yet been fully collected. Professor Takagi uses fluid analysis to investigate the true nature and unknown characteristics of fish in general, but has a particular focus on the bluefin tunas.

Tunas are large, carnivorous fish that inhabit the sea. They are a member of the perciform fish, under the scombroidei suborder, in the scombridae family. Their biological classification is the same as mackerel and swordfish. Besides the bluefin tunas, eight other species exist, including the familiar yellowfin tunas and bigeye tunas. The bluefin tunas are the largest in the group. They can weigh 400kg (882lb) and be 3m (10ft) long. Known as “the diamonds of the sea,” they account for only 2% of the entire tuna catches, and are traded in the market at the highest rate. Professor Takagi and his team have been using fluid analysis to investigate the bluefin tunas’ swimming capability.

Tunas swim very fast. Some swim nearly 90km/h (56mph), though slower ones, such as the yellowfin tunas, swim at 75km/h (47mph). The Indo-Pacific sailfishes, which are known as the fastest marine creature, swim at 108km/h (68mph). In terms of the body length per second, the yellowfin tunas are at 20BL/s and the Indo-Pacific sailfishes are at 15BL/s, which indicates that tunas are one of the fastest, medium sized fish species. 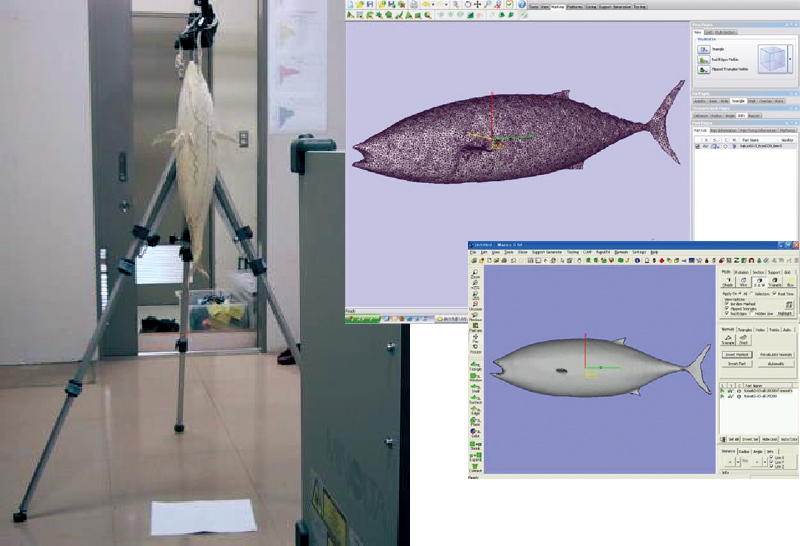 Figure 1: A frozen tuna being scanned on a 3D scanner


Considering their speed and ability to swim long distances, the fluid drag force on the tunas’ bodies was thought to be small. But the unanswered question was: how can a tuna’s drag force be measured or calculated? To test a live tuna in an underwater environment, Professor Takagi would need a tank that was large enough for the fish to swim. The tank would also need the capability to change the fluid velocity. Attaching a resistance board to the fish would also be needed. Convinced that the results would be inaccurate even if the research team managed to conduct such a test, Professor Takagi explored the application of computational fluid analysis. Professor Takagi created a virtual model of a tuna by scanning a real fish using a 3D scanner. The Professor recalls that modeling the fish was a demanding task. It required preparing a frozen tuna to prevent decay, and painting the fish white to minimize diffuse reflections of the laser (see figure 1).

Figure2: Fluid analysis of a bluefin tuna with the tail in motion

Professor Takagi conducted a simulation that accounted for the movement of the tail (figure 2). He created a smooth virtual representation of a moving tuna by recording a video of a real tuna and approximating the motion of each point on the body with periodic functions. This enabled him to investigate the motion of the bluefin tunas even further, such as identifying the tail thrust and analyzing the outward movement of the pectoral fins, which function as wings.

A pectoral fin is essential for the swimming capability of tunas, as it generates the lifting force. Although tunas possess swim bladders inside their bodies, the bladders do not fully sustain the upward force needed to keep them buoyant. This is one of the reasons why tunas must keep swimming. They use a similar mechanism as airplanes use to produce lift. Professor Takagi’s simulations showed that substantial lift can be generated by moving the tuna’s pectoral fins outward. In addition, tunas can streamline their bodies to minimize drag by tucking their pectoral fins into the indentions on the sides of their bodies. The caudal peduncles are that the bumps attached to the root of the tunas’ tails also function as minuscule wings. “For the larger migratory fish such as the Indo-Pacific sailfishes, two layers of caudal peduncles are attached just like a biplane. It’s fascinating that the reasons and purposes behind the designs of living organisms become evident when I look at it from the fluid-analysis perspective,” comments Professor Takagi.

The Logic behind the Motion Revealed by Analyses

According to Professor Takagi, the quantitative results generated by the fluid analysis illustrate why tunas swim up and down when moving forward. This particular style of swimming has long been noted by scientists, and has been suggested that it improves efficiency. Another theory proposed that the fish used gliding for repose, which enabled them to swim longer. However, neither theory had been confirmed until bio-logging technology became available. This technology enables live measurements on real fish by attaching sensors to the fish and monitoring their motions and environmental conditions. Using the data for water depth, degree of the body tilt, and vibration counts of the tail, Professor Takagi conducted fluid analysis and successfully confirmed the efficiency theory. Professor Takagi learned that changing the water depth while swimming increased swimming efficiency by 10-20%. 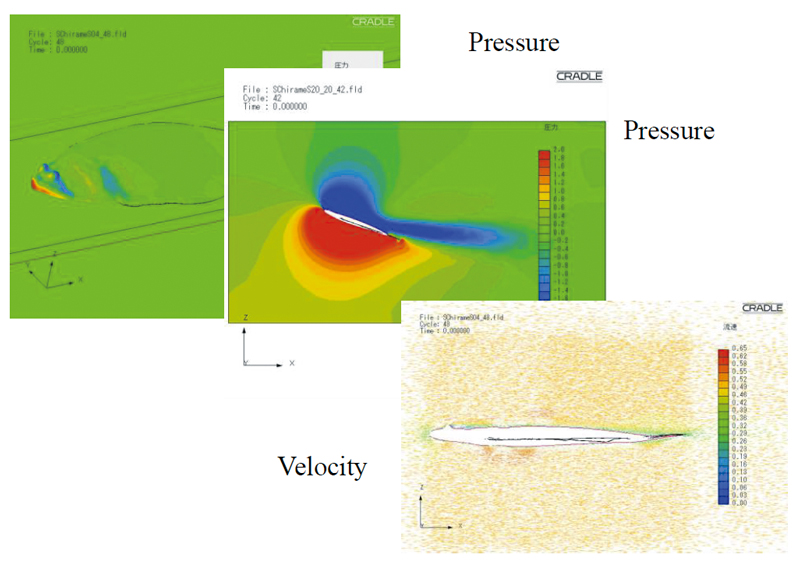 Using fluid analysis to calculate values of lift and drag for the Japanese flounder, Professor Takagi determined the ideal angle needed by the Japanese flounder to stably glide. He found that the calculation matched the observed results. Professor Takagi notes that he was intrigued to find that the fish behaved exactly as his calculations suggested. This is just like how vehicles function in the way they are designed.​

Professor Takagi has used SC/Tetra in his research for more than ten years. The software possesses easy operability and reliability. The use of fluid analysis had long been appealing, but Professor Takagi recognized that a substantial amount of time and cost would be required for him to develop his own tool. He found SC/Tetra in his pursuit of a packaged product that would be easy enough for his team to use.


Professor Takagi is satisfied with the capability of SC/Tetra. The software is not only easy to use, but also it produces excellent computational results and includes superior technical support. Professor Takagi recognizes that computational analysis tools may not be able to perfectly simulate the complex physical phenomena occurring in nature but can be useful for drawing relative comparisons. For example, analytical methods can be used to compare the difference in drag between two angles of attacks.

“We have not yet completely mastered the operation. For example, we are still struggling to understand turbulence that occurs on the skin surface when we compare a shark and an Japanese flounder. The analysis is tricky because results can be massively dependent on the turbulence model used. In terms of the hardware environment we have prepared for the research, the computer capability has been improved and the price has become reasonable. We benefit tremendously as the equipment we need is within our research budget,” says Professor Takagi.

“Obtaining accurate experimental results is extremely difficult. We can only acquire approximate values from experimental measurements. Simulation is the only method that generates accurate results for us. This fluid analysis tool has become indispensable to us,” comments Professor Takagi. 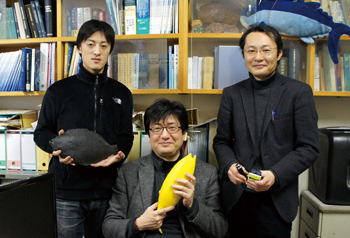 Professor Takagi hopes to see more uses of ICT in the field of fishery. In the field of agriculture, ICT have become much more common, being used for environmental monitoring and crop observation. However, application of ICT to the vast and deep underwater environment is not an easy task. Professor Takagi’s research on fish behavior and simulation of round haul nets are considered significant technological advances.

In the future, fluid analysis may make it possible to selectively capture fish of a particularly favorable size by analyzing its behavioral patterns and swim speed. Establishing the official fishing guideline is expected to improve the supply efficiency of aquatic resources and stabilize the production. The concept of combining the ICT and fishing is referred to as ‘smart fishing’ by Professor Takagi and other researchers of this field. Clearly, the use of ICT as applied to fishery, has substantial room for growth.

*All product and service names mentioned are registered trademarks or trademarks of their respective companies.
*Contents and specifications of products are as of January 1, 2014 and subject to change without notice. We shall not be held liable for any errors in figures and pictures, or any typographical errors.