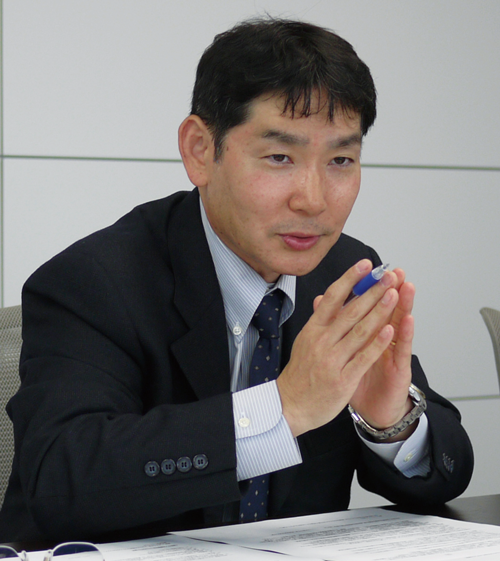 The market of optical media, such as DVD and Blu-ray disc drives, is competitive. Demand is high, and customers expect lower prices and further miniaturization. Panasonic Corporation uses thermal fluid analysis during product development to maintain temperatures below hardware durability limits, even under extreme operating conditions.

Panasonic is a general electronics company with businesses in home appliances including audio visual devices, industrial equipment, IT tools, business and household products, and energy/environmental products. In 2018 the company will celebrate its 100th anniversary. 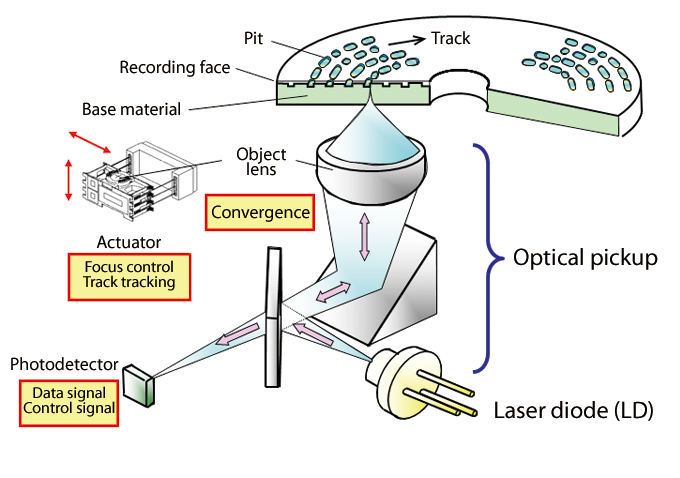 
Mr. Hideki Nakata, from the Blu-ray disc drive development task force at the Panasonic Corporation R&D Center Headquarters, has been involved in optical disc drive development since the time when CD drives were the dominant product in the market (fig 1). He has worked as a development researcher for optical pickups (fig 2), the main component of the optical disc drives, which read and write information. Mr. Nakata has also developed Mini Discs, DVD, and Blu-ray discs. He has applied thermal fluid analysis tools for the development of the optical pickup, a part of the drives where Panasonic has outperformed its competitors. Analyses have been used to determine the most effective thermal design of a high-power Laser Diode based on its thermal conductivity and radiation emissivity during conceptual design. Mr. Nakata was also the project leader of the ultra slim Blu-ray disc drive development, where he was in charge of research, design and establishing the manufacturing facility. Later he was part of the development team for a high-capacity archiver. In 2013 Mr. Nakata started working on the research and development of fuel cells. A fuel cell is designed to generate power by the chemical reaction between the hydrogen extracted from the fuel and oxygen in the air. Mr. Nakata has been using thermal fluid analyses to design the generator. 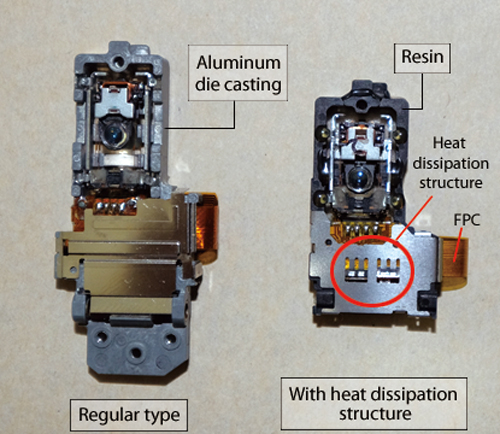 Panasonic first introduced scSTREAM, a structured mesh thermal fluid analysis tool, in 2005 when they were developing optical disc drives for Mini Discs. Mini Discs consist of a high-power 800 nanometer wavelength Laser Diode, which generates a micrometer laser spot onto the disc surface using small optical systems to read and write signals. “The design of optical disc drives must balance production cost, device size, capability and reliability, which often pushes each constraint to its limit,” says Mr. Nakata. Panasonic recognized the need to improve thermal design when facing the fierce competition in the portable Mini Disc market driven by lower prices and smaller size. Aluminum die casting had been used for the base component for the optical element, but was changed to resin to reduce cost. However, the resin did not conduct heat as well as the aluminum, which would have increased the temperature of the Laser Diode past its design limit, and devices would have been damaged. To avoid this, Panasonic utilized the convection caused by laser disc rotation to help cool the optical pickup more effectively.

Initially, the disc system product development process involved designing and prototyping, followed by testing to measure the Laser Diode temperature. If the temperature exceeded the safe limit, the engineers performed a redesign, produced another prototype, and revalidated the capability. This development cycle took three months. Completing the evaluation of each component and the overall structure could take up to two years to completely ensure the Laser Diode met its durability requirements. In a time when product development needs to be as short as possible, performing detailed thermal design early in the process and accounting for heat conductivity and emissivity in the analysis could significantly reduce the development time. Not only would development be faster but high product quality could also be maintained. Panasonic needed a highly accurate analysis tool with easy operability to enable them to make quick decisions about thermal design. They found scSTREAM could help them meet their requirements.

Panasonic decided to use scSTREAM because “not only did it have a comprehensive variety of functions, but its interface was extremely easy to use compared to other tools,” says Mr. Nakata. Panasonic engineers found it convenient that 3D-CAD data could be directly imported into scSTREAM. Then the mesh elements could be generated without having to transform the geometry data into a different format. Setting the thermal contact resistance between components using data from experiments was also simple, as well as simulating the air flow generated by disc rotation.

The Panasonic engineers report that, using thermal analysis, the Laser Diode temperature could initially be predicted in the early design phase within 5ºC. The analysis accuracy was improved to 1ºC, by making precise measurements of the thermal resistance between components during prototype experiments. By doing this, the thermal design was completed by the second experiment, which also served to double-check that the measured values were as predicted. The Panasonic engineers said that by performing the thermal analysis the design period has been reduced to a half year. In addition, they are also able to accurately anticipate temperature variations under different operating conditions prior to the actual production. They have also been able to apply the analysis method developed for the Mini Disc drive to the miniaturization of their DVD and Blu-ray disc drives. 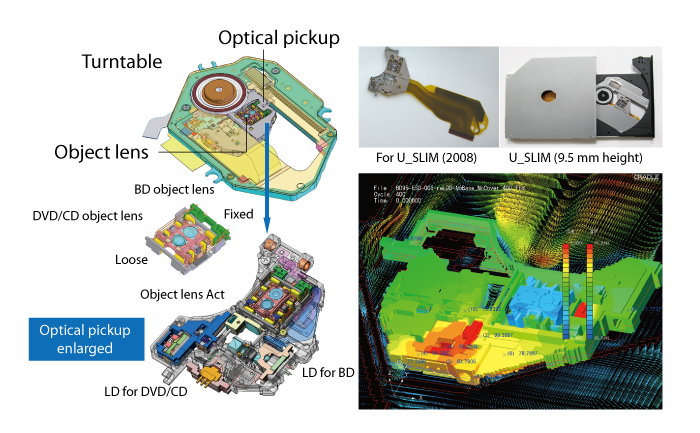 Reducing the temperature of a Laser Diode in a small drive is challenging because the temperature tends to increase in smaller spaces, and less surface area is available for heat dissipation. Blu-ray disc players use a blue Laser Diode with a 605 nanometer wavelength to generate a 0.1 micrometer laser spot on the disc surface. This requires the ability to focus the light with very high accuracy. For this reason, errors in optical systems, which can be caused by deformation of parts due to heat generation and declination of optical axes, must be minimized. 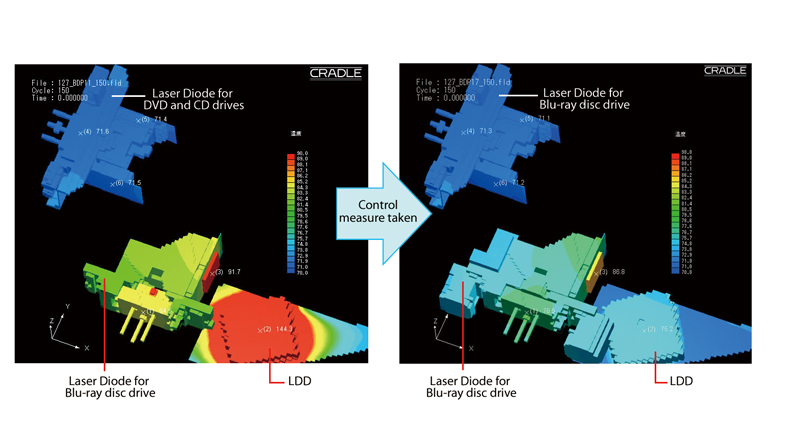 
The heat sources of the optical pickup are the Laser Diode, the Laser Diode Driver (LDD), and the object lens driver, which is activated by magnetic coils that emit heat. If the object lens temperature rise is uneven at different locations, the lens will deform and the size of the laser spot will change. This can ultimately alters the quality of the recording or the played output. Therefore, the one thermal goal is to maintain a uniform inside temperature distribution. An analysis of the inner temperature during drive operation is shown in fig 4. The heat source is shown in fig 5. As shown in the figure, the Laser Diode and LDD temperatures have been decreased by implementing thermal control measures. A steady-state analysis of an optical disc requires a detailed mesh with 20 to 100 million mesh elements. This level of geometrical resolution is necessary to capture the extremely small gaps between components.

In 2011, Panasonic released a recorder with a 100GB hard drive using a multilayer optical disc drive. Thermal control became more complicated for the multilayer disc. Concurrent with the pursuit of drive miniaturization, Panasonic engineers used scSTREAM to adjust designs to achieve heat conduction and dissipation targets that maintained the operational temperature of the Laser Diode at the target values.

Panasonic has also undertaken research and development on a high-capacity data archiver that uses optical discs. A high-capacity data archiver is often used in data centers to store an immense body of data such as movie files. Panasonic engineers were looking for a convenient way to record/replay with greater recording density compared to Blu-ray disc drives. They used SC/Tetra to conduct dust dispersion analyses inside the chassis.

Mr. Nakata explains that accounting for dust dispersion in recording systems was never thought necessary until recently. However, a high-capacity data archiver can be easily affected by small, nanometer sized dust particles, because of its greater recording density. Since performing maintenance inside the chassis is unrealistic, understanding the dust dispersion patterns within the device makes it possible to modify the design as needed. SC/Tetra was also used to conduct transient analysis of varying dust concentration over time.

SC/Tetra was used to both estimate varying dust concentrations over time and design the dust collection system. Fig 6 shows a dust collection system design that uses filters. Dust particles larger than 10 nanometers on the recording head would likely lower the device's reliability. A filter was installed for removing dust particles, and it was modeled in simulation such that half of the dust particles larger than 0.1 micrometers are removed each time they pass the filter. Panasonic engineers performed the thermal fluid/particle analyses to evaluate how effectively dust could be removed over a period of time. The results showed that the dust clearance time increased by a factor of 9 when the clearance volume doubled.

To further improve the overall system’s energy efficiency, energy generation efficiency must be improved. This requires strict control of the thermal design to minimize heat. “Fuel cell system design must consider cost, size, capability and durability,” says Mr. Nakata. This is where the application of thermal fluid analysis comes in. With the current system design, Panasonic engineers perform thermal fluid analysis to determine the best layout for each component, evaluate different flows, observe the heat exchange, and calculate the heat balance.

Panasonic engineers hope that chemical calculations such as catalysis reactions and combustion models will soon be implemented into Cradle analysis tools as optional functions. By identifying the heat generated in the chemical reaction and understanding the combustion phenomena, analysis of the entire fuel cell system can be more integrated.

Cradle software has been used to help design many Panasonic products. Panasonic engineers are eager to continue to apply the analysis tools to a wide range of energy related products that is sure to lead to more effective product development.

*All product and service names mentioned are registered trademarks or trademarks of their respective companies.
*Contents and specifications of products are as of April 30, 2014 and subject to change without notice. We shall not be held liable for any errors in figures and pictures, or any typographical errors.