Yamaha Motors is one of the major motorcycle companies in the world. They have a long history of domestic and international racing. They have been using SC/Tetra from Software Cradle for the premier motorcycle racing class, MotoGP. This CFD tool has been effective in both complying with design regulations and securing aerodynamic competitive advantages. Its powerful visualization capabilities and robustness, plus its user-friendly operation matches the requirements for rapid motorbike design developments in a racing environment.

History of Participating in Unbroken Line of International Races

Yamaha Motor Co., Limited is a world leading motorcycle and motorized product manufacturer, who generates 60% of sales from motorcycles. Their products also include outboard motors, ATVs (4 wheel buggies), snowmobiles, vehicle engines, chip mounters, industry robots, and even unmanned helicopters. Their business operations are international and 90% of their sales is generated from outside Japan.

The roots of the company's participating date back to 1955, where their YA-1 won the 3rd Race at Mt.Fuji. Since then, they have continually participated in MotoGP races and grown their presence in the field beyond Japan.

Above all, MotoGP, and the FIM Grand Prix World Championship is very significant for Yamaha, which retains consistent popularity in Europe and worldwide because of it. The races are held 19 times a year from every March to November across four continents including Japan, and they are broadcast in 207 countries around the world. 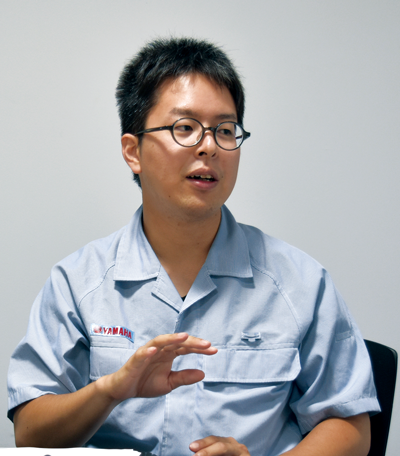 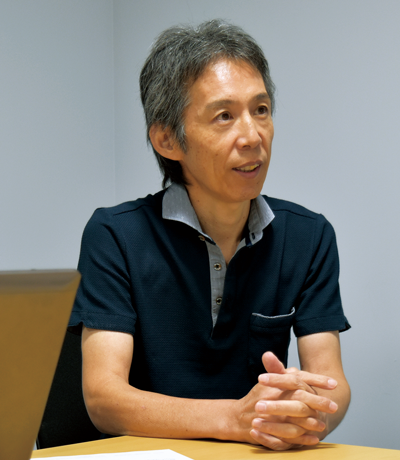 
Mr. Shotaro Kawakatsu who belongs to Motor Sports Development Division (picture 2), is a member of the development team for the machine for MotoGP races. He joined Yamaha Motor in 2016 and since then he belongs to MotoGP Group after working on the aerodynamic analysis of the race bikes. He is now working on a wide range of design developments for the team.

Mr. Kiyoshi Shimada (picture 3), who belongs to the Yamaha Digital Engineering Division, oversees utilizing and educating CAE analysis tools in Yamaha Motor. Mr. Shimada joined the company in 1987, has worked on bike body design and has 10 years of experience with structural analysis using MSC Nastran. He started to work on fluid analysis using SC/Tetra. Since 2000, and is now working on the development and introduction of various tools related to fluids analysis, education of the analysis technique, and the maintenance of race bike manuals for fluid analysis.

MotoGP design has taken its current form in Yamaha since 2002. From this time Yamaha Motor has used SC/Tetra for the development of their machines. “We use SC/Tetra to enhance the total driving performance, comfortability and reliability” says Mr. Kawakatsu (figure 1).

Verification of Aerodynamics and Thermal Flows on MotoGP Machine's Design

It is important to note bike stability when running on a rectilinear line when analyzing aerodynamics. In MotoGP, the motorcycle displaces 1000cc and 240 horsepower, and reaches 350km/h at maximum speed, which exceeds the speed of a bullet train! Keeping the body stable in high speed is important not only for fast times but also for the safety of the rider. 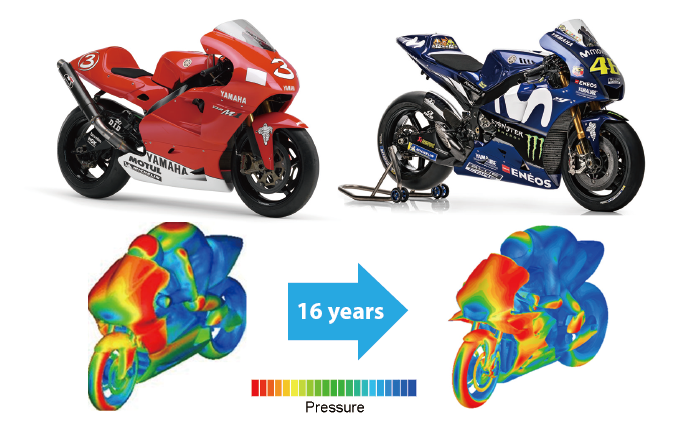 
Another point is controllability for cornering. Cornering speeds reach 200km/h and the the bike’s lean extends to 60 degrees. Getting the race line and the level of exhaustion of the rider depends on the force from the air.

Moreover, as air flow affects other issues, improvements need to be made on the engine’s horsepower by air going into the nose intake, as well as taking into account performance of radiator, oil and brakes; and coolability of electrical components. Not only it takes so much time to verify everything in wind tunnel experiments, but it is also difficult to test with someone riding in the first place. That is the way, Yamaha Motor uses SC/Tetra CFD for prior verifications.

The shape of the bike body changes every year based on the regulation of MotoGP and trends. For example, in the early 2000s, the highest priority of the cowl was to achieve the highest speed and was made to minimize the resistance of the air for running on a rectilinear track.

Around 2015, aerodynamic trends shifted to the front cowl wing. The wing generates downforce and helps avoid wheelies. When speed reaches 350km/h, the body tends to wobble by Karman vortexes but it can be improved by pressing the front wheel. To avoid a wheelie, an ECU (Engine Control Unit) can be an option but as it limits engine output and may slow down – this is why wings are important.

However, the use of wings was prohibited in 2016 for safety reasons. All appendages that are not integrated with body streamlines were prohibited, including vortex generators.

Also, the regulation directed them to use common ECU software programs for all contestants. "Primarily we ran in-house software to have the precise control we needed but it was not possible. As a result, wheelie control performance declined,” says Mr. Kawakatsu.

“The effect of the wing over wheelie was quite significant and we could not give in to a regulation. My challenge for the first year was to devise aerodynamic parts that generate downforce effects in the inner body,” says Mr. Kawakatsu. He started to use SC/Tetra from this time and Mr. Shimada helped him learn the operation.

During new regulation understandings, Mr. Kawakatsu came up with an idea to achieve maximum aerodynamic performance, which is to make the wing structure inside the inner cowl. He says: “Riders strongly desired to keep the aerodynamic capability achieved by wings designed in 2015, or if possible improve them, and I want it to meet their expectations” (picture 4). 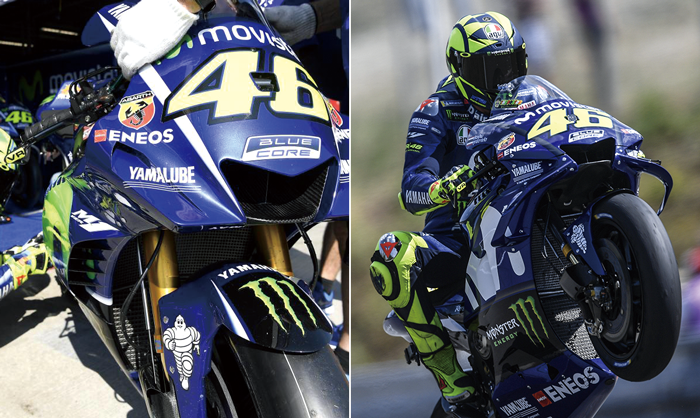 
Since approval from organizer is needed to show that the shape of the cowling meets the regulation, the Postprocess capability of SC/Tetra helped convince them of the legitimacy of the shape.

“CFD visualized analysis results were useful for providing reasonable explanations and to convince the organizer,” says Mr. Kawakatsu (figure 2). They created 200 models which were analyzed at the end of 2016. They chose the best 5 models for actual running tests, which satisfied certain levels of aerodynamics and operability, and finally came up with the best specification. Mr. Kawakatsu reckons that he can enrich understanding of aerodynamic development through this process. 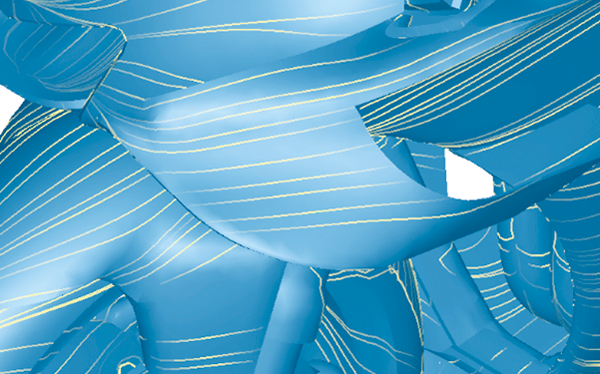 
Easy to Apply to New Analysis

Mr. Shimada provides internal CFD training using SC/Tetra. It is a one-to-one training to master basic analysis after 5 or 6 half day lectures. Each trainee has different level of understanding at the beginning - some have studied CFD and attained profound understanding like Mr. Kawakatsu, whereas some have not. Mr. Shimada changes his training approach depending on the level of the audience and makes sure he covers lectures on operation and interpretation of results.

Mr. Shimada claims that SC/Tetra is the most user-friendly CFD software. Interface for preprocessing and post-processor is easier than any other software, which he thinks its characteristic of Made in Japan is well represented.

Mr. Kawakatsu also endorses the fact that SC/Tetra is easy to apply for a new CFD analysis issue. When he tackled aerodynamic analysis first and then thermal analysis of electronic parts, he intuitively could change the condition and settings.

The development of race machines requires prompt CFD solutions. Mr. Kawakatsu says “I was not used to the software at the beginning. I could not generate fine meshes, but MSC Cradle CFD has robustness and enough accuracy. It would be a hassle if there was a calculation divergence and we had to identify the cause. In the development of racing machines, we are often asked to come up with analysis results by the end of the day and this is the reason we like Cradle CFD. It is robust, fast, and accurate.”

“The support team of MSC Cradle CFD has been superb in solving problems” says Mr. Shimada. Yamaha Motor is now starting to shift to scFLOW, the successor of SC/Tetra and is expecting far more function enhancement.

Yamaha Motor has multiple motorcycle development bases worldwide. For now, CFD analysis is performed by head office engineers, but they are considering introducing MSC Cradle CFD to other bases too. When this is made possible, it will mean that either analysis results calculated by head office engineers are reviewed by regional engineers, or engineers in each region take up CFD analysis by themselves. The former idea is easier because regional engineers only need to install the software, but with the latter idea, they will need to have a trainer in order to make sure regional engineers are familiar with the software and hardware. For this reason, there will be more discussions on CFD introduction.

Nevertheless, Mr. Shimada recognizes the potential need to perform CFD globally in future. MSC Cradle CFD is available via MSC Software and supported by local representatives across the globe. This is certainly the case with Yamaha Motor, and Software Cradle regional support teams aligning with MSC Software will help them drive their further for worldwide expansion.

*All product and service names mentioned are registered trademarks or trademarks of their respective companies.
*Contents and specifications of products are as of September 28, 2018 and subject to change without notice. We shall not be held liable for any errors in figures and pictures, or any typographical errors.