In the previous column, we covered the overview of RANS. In this column, we discuss an example of RANS calculation. We take a flow analysis of engine valves shown in Figure 9.1 as the example. Engine valves are located at the exit/entrance above a piston, and they are crucial components that control the timing of intake and exhaust. With a flow analysis around the valves, we can predict air resistance (pressure loss) across the valves as well as the fluid mixing performance. 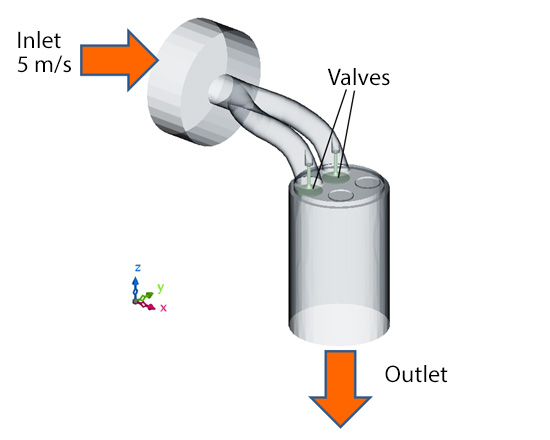 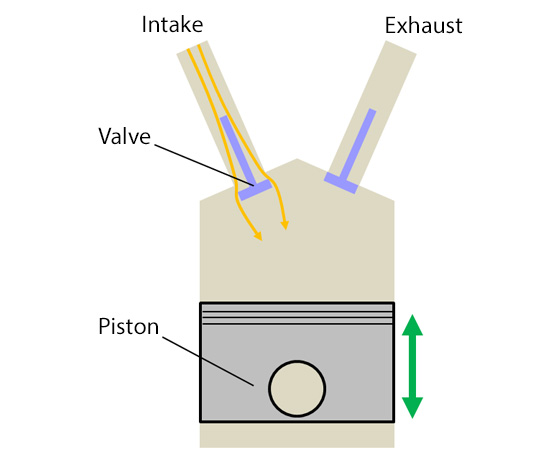 
Figure 9.3 shows generation of eddies near the valves analyzed by LES (Large-Eddy Simulation). The subsequent columns will explain LES in details; in the simple terms, LES is a calculation method that directly calculates vortex tubes of the sizes greater than mesh size and takes account for the influence of smaller vortex tubes with modeling. The figure illustrates generation of many small vortex tubes as the flow passes through the valves and becomes turbulent. I (and only I?) find the result like Figure 9.3 interesting because it “looks just like the real phenomenon”, but the calculation takes long even with a parallel-computing machine. When design engineers are conducting many case studies, they prefer methods with shorter calculation time and hence RANS is more utilized. Figure 9.4 shows the result of flow analysis with RANS (standard k-ε model). Since a time-averaged field is calculated in RANS, a time-averaged result of LES is shown for comparison. You can see that the flow fields are quite similar. Unfortunately, motions of vortex tubes cannot be captured with RANS, yet it is enough for the purpose of knowing the pressure difference across the valves or the overall flow characteristics. Calculation time of RANS is between one tenth and a few tenth of LES; therefore, RANS is a calculation method suited for performing many case studies with different conditions and/or different valve geometries.


Figure 9.3: Vortex tubes near the valves analyzed by LES 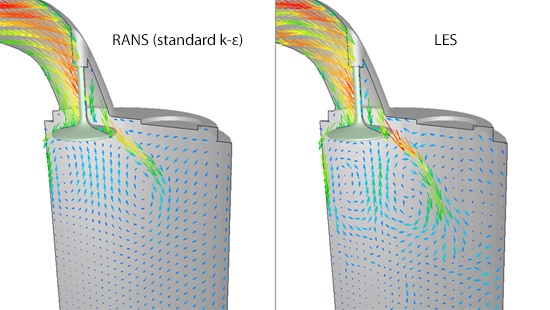 Figure 9.4: Comparison of flow near the valves 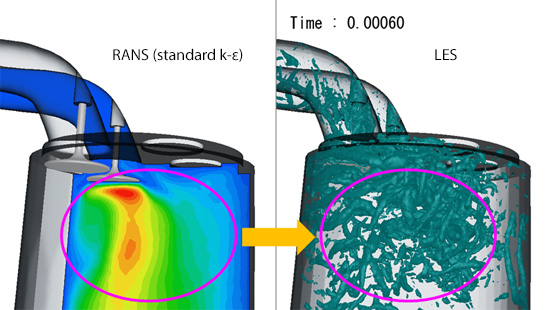 In RANS model, eddy viscosity is calculated by a ‘turbulence model’. Let us see how the calculation results change with different turbulence models. Figure 9.6 shows a comparison of flow vectors for standard k-ε model and the same model with Kato-Launder correction. There is hardly any difference between them. The next figure is a comparison of turbulence energy distribution (Figure 9.7). For standard k-ε model, there is a local maximum of turbulence energy where the flow impinges on the valve from below. On the contrary, there is no such distribution for the model with Kato-Launder correction. This is the result where standard k-ε model estimates “generation of turbulence” because velocity changes abruptly when the flow hits the wall and velocity difference becomes large. 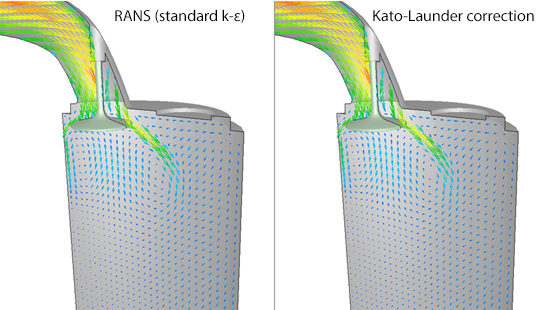 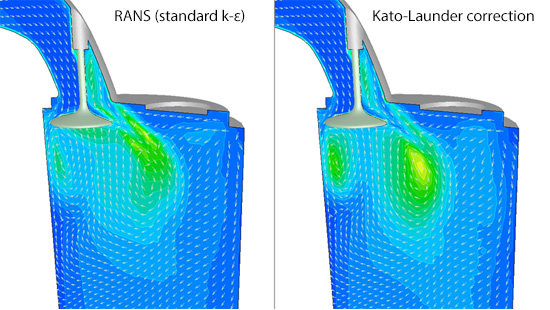 In the next column, we will discuss wall conditions of RANS model.