Velocity and speed are a distance that a fluid or an object moves per unit time, and their unit is m/s. Velocity indicates the distance and the direction of a motion, and is called a vector quantity. To define a vector quantity, both magnitude and direction are needed. On the contraryother hand, speed indicates only the distance of a motion, but not the direction. This type of physical quantity is called scalar quantity. Table 3.1 shows some examples of vector and scalar quantities observed in thermo-fluid analyses even though some of them have not been introduced yet in the column series.

Figure 3.4 Difference between velocity and speed 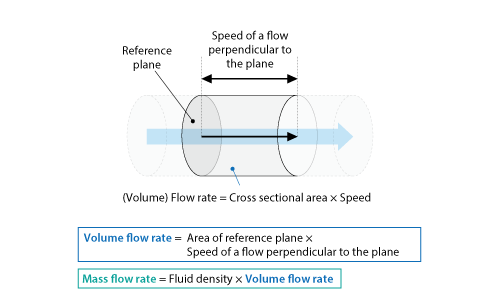 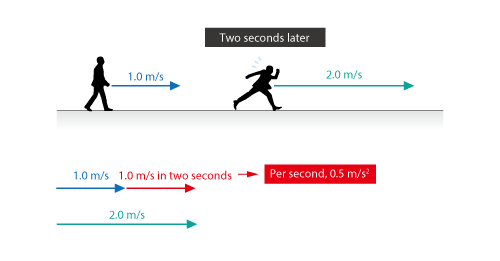 Want to know more  Components of a vector
Vector quantity has a concept, “components”. Let us take a 2D velocity vector shown in Figure 3.7 for example.

Figure 3.7 Velocity vector and its components

As shown in the figure, a velocity vector can be decomposed into two components; x and y directions. The negative and positive measurements from the origin in each direction are called components and described as (u, v). A vector of length unity in each direction is called unit vector. Assuming that unit vectors in x and y directions are expressed as ex and ey respectively, the following relation can be obtained between the velocity vector and each component.

Seeing Figure 3.8, let us think about observation of the velocity of a car. The observer is standing on the road in Eulerian method, while he is sitting in the front passenger seat in Lagrangian method.