Two-fluid model is an example of gas-liquid two-phase flow analyses or liquid-liquid two-phase flow analyses. It is also called distributed multi-phase flow model, Euler-Euler model, Euler multi-phase flow model depending on the fluid simulation analysis software products, however, they are the same as a model to solve the basic equation for each phase by regarding each phase as a continuum. The model can be expanded to n-fluid model, however, analysis is possible up to three-fluid model in consideration of calculation load and convergence.

Figure 1 shows an outline figure of underwater bubble jet analysis, and Figure 2 shows the gas phase volume fraction of the analysis result. As shown in Figure 2, it is also possible to analyze by regarding the particles of flowing bubbles and liquid drops as a continuum (dispersed phase). In addition, it is possible to analyze even a solid-gas two-phase flow and a solid-liquid two-phase flow by regarding powder as a continuum. In both cases, it is necessary to define interactions between phases (resistance that the particles receives from the fluid) and between particles. 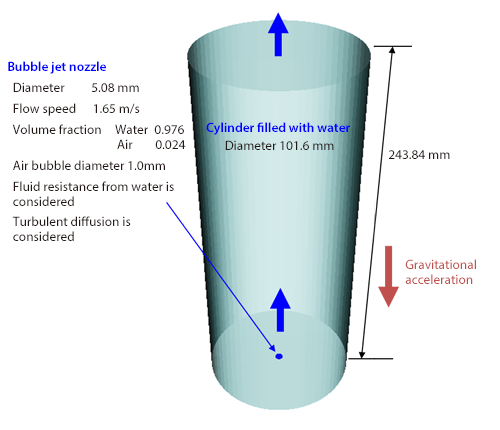 
Here is an analysis example. Different liquids are mixed with a static mixer. Since a static mixer has a simple structure and does not require rotation power, it is used in various fields. As shown in Figure 3, consider piping with a T-shape pipe (JIS 8A Sch. 20S, internal diameter of 9.8 mm). Pour two liquids with a density of 1000 kg/m3 and a viscosity of 1.0 Pa·s from two inlets at a flow rate of 0.30 L/min. The viscosity of the two liquids is 1000 times as high as that of water and same as that of fruit source. Twelve elements with a length of 10.4 mm are set by changing the angle of the straight axis direction by 90 degrees. Under these conditions, steady analysis of the laminar flow is conducted. 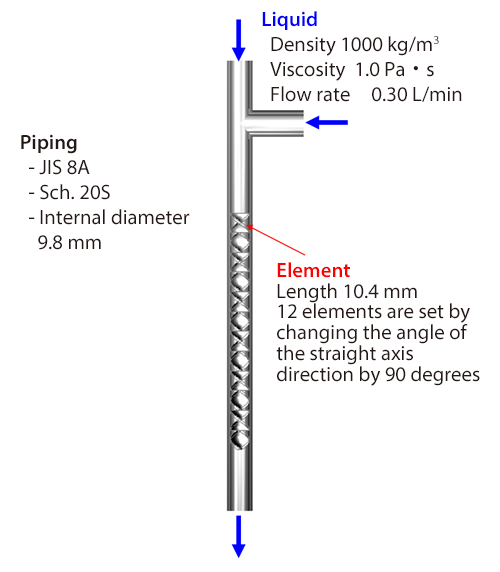 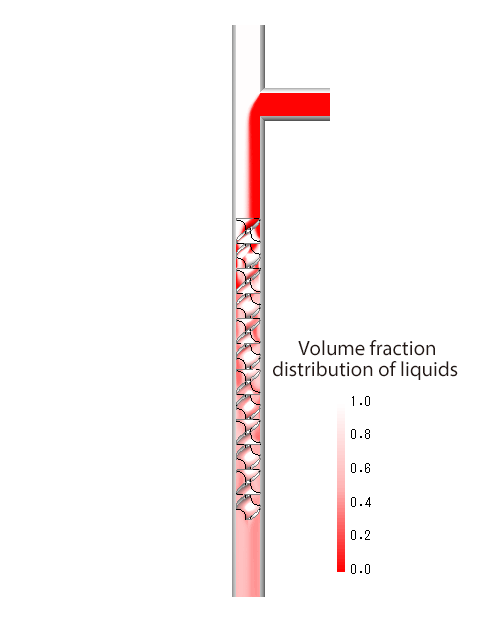 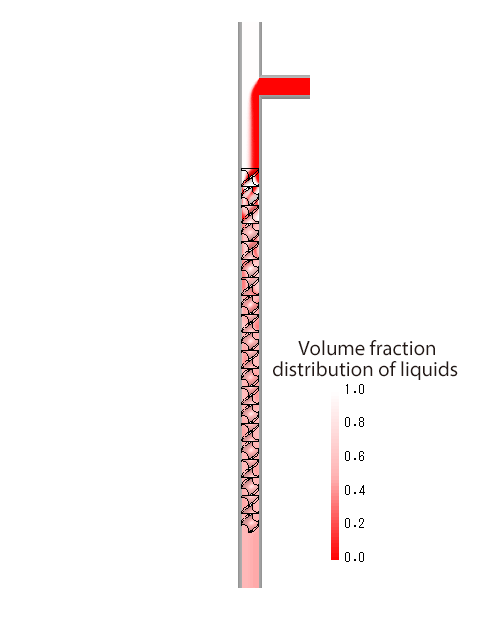 
Now, unsteady analysis of the laminar flow is conducted by changing the material properties of two liquids. As shown in Figure 7, JIS 8A Sch. 20S is used for the piping on the straight side of the T-shape pipe, and 6A Sch. 20S (internal diameter of 7.5mm) on the mixing side. The liquid that flows straight ahead has a density of 1000 kg/m3 , viscosity of 0.001 Pa·s (same as water), and flow rate of 0.30 L/min, and the liquid that is mixed has a density of 1000 kg/m3 , viscosity of 0.0035 Pa·s, and flow rate of 0.075 L/min. Imagine that milk is added to coffee to make coffee‐flavored milk with a volume ratio of 20%. Figure 8 shows the temporal change of the volume fraction distribution. It shows that it becomes more homogenized. When the difference of material properties of the two liquids is made larger, the degree of separation increases, producing a free surface flow. In this case, it is recommended to analyze with the VOF method introduced in this column before. The time in the video in Figure 8 is accelerated by two times. 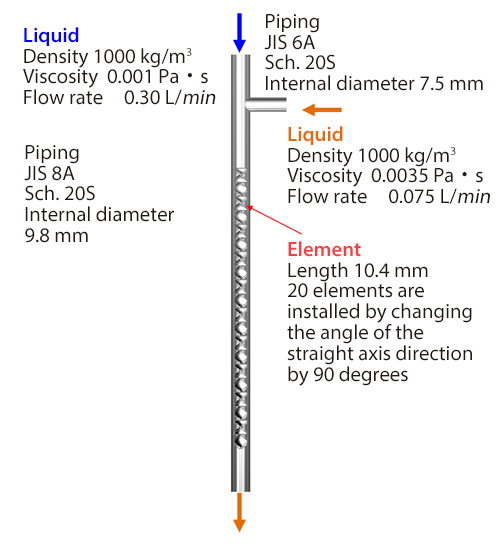 This column is concluded with this section. Thank you very much for reading this series. As long as computers continue to evolve, the application scope of fluid simulation analyses for multi-phase flows will further expand. I hope this column has triggered you to work with fluid simulation.