Airflow control is crucial in the production of equipment used for semiconductor assembly. These processes require a clean environment and delicate control of the facility air-conditioning system. As a total manufacturer of production facilities, Hirata Corporation uses scSTREAM, a thermal-fluid analysis tool, to simulate the principal flow mechanisms for different types of manufacturing facilities and equipment. Using the tool is beneficial in many ways. It is used for product development and to more effectively communicate the results in presentations.

Hirata Corporation is one of the largest manufacturers of production facility equipment in Japan. They mainly specialize in manufacturing tools and equipment for the vehicle, semiconductor, and home appliance industries. They manage operations for the Japanese domestic market from seven facilities throughout the country. They also have affiliated companies in nine countries including the USA, Mexico, and Germany. Production facility start-up projects managed by the Hirata Corporation are highly regarded both domestically and internationally. They are recognized for providing immediate solutions using a diverse range of core technologies, including robotics, carrier control, equipment control, cleaning, and precision instruments. 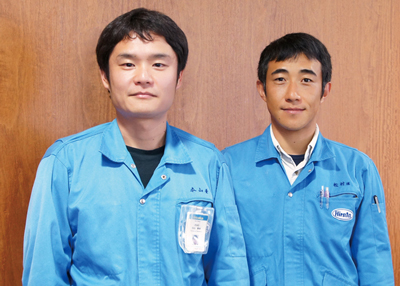 
The company's prominence is closely linked to their policy to conduct development, design, component production, assembly and evaluation of their products, and facility startups using Hirata Corporation resources. The biggest strength of the Hirata Corporation is having the capability to manufacture components, which smoothens the transition to the later assembly processes. This results in stable delivery of high-quality products. To achieve this strength, the Hirata Corporation introduced large-scale engineering machinery, such as a machining center with a 5-face Machining Center, laser machines, and aluminum die casting machines. Having these manufacturing capabilities in-house has enabled them to minimize cost and delivery time as well as provide first-class, reliable production facilities. 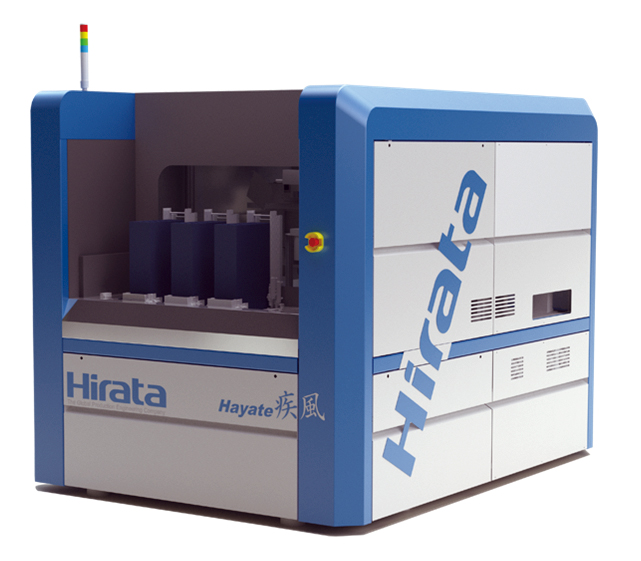 
One of the products they have developed is Hayate, a flexible assembly system (Picture 2). Mr. Takahiro Motoyama and Mr. Michitaka Matsumura (Picture 1) are analysis specialists who conduct advanced research in specialized subject areas. Mr. Motoyama specializes in airflow analyses, and Mr. Matsumura is an expert in structural analyses. Simple analyses, like linear analyses, are handled individually by each division, whereas the analysis specialists are responsible for more complicated cases. These include material non-linear, contact non-linear, and fluid analyses.

The Hirata Corporation started using scSTREAM in 2007, in response to their engineers’ requests to develop capabilities to visualize airflow, which is basically invisible. Although they had tried using flow visualization techniques during experimental tests, the findings were not sufficient to answer many of their design questions. Visualizing the flow using a computational simulation would promote greater understanding of physical phenomena, leading to quality improvements and cost reduction. The Hirata Corporation assigned this responsibility to Mr. Motoyama, and he led the search to find the right fluid analysis tool.

The team initially looked for an analysis tool that could simulate moving objects, such as large-scale substrate transfer robots. Since many of the company's end products were large-scale, simple-shape equipment, the Hirata Corporation searched for a structured mesh analysis tool equipped with a fast solver. After performing extensive due diligence, the team decided to use scSTREAM, which satisfied their product and budget requirements. 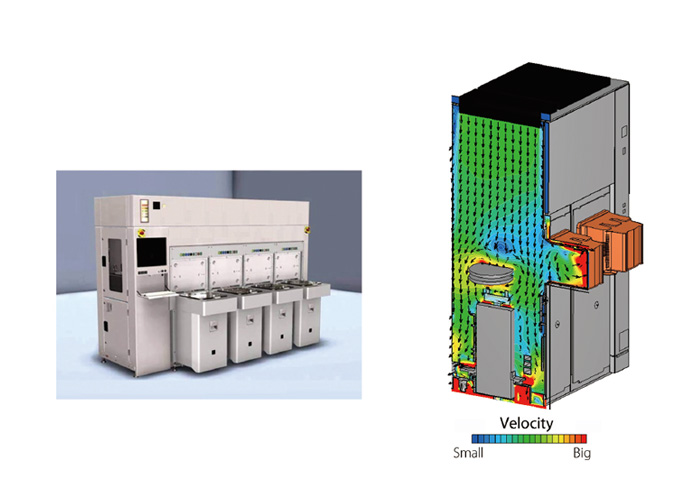 Figure 1: EFEM used in the prior process of semiconductor production (left) and analysis example of EFEM showing the velocity vectors and contours (right)

One series of analyses Hirata Corporation conducted was for the EFEM (Equipment Front End Module), which is used in semiconductor production (Figure 1).

The EFEM is implemented throughout the wafer manufacturing process, and is used for wafer transfer from the FOUP (Front-Opening Unified Pod), a container of dozens of wafers, to the manufacturing equipment. “The space used for semiconductor production must be absolutely clean. The larger the space becomes, the higher the cost to maintain cleanliness. As a solution to this, we applied the concept of ‘mini environments’, which maintains the cleanliness only around the wafer's immediate surroundings,” explains Mr. Matsumura. EFEM uses the concept of mini environments to transfer wafers. The process for fabricating semiconductor devices consists of seven phases, which can be divided into more than 100 steps. EFEM is used in many phases including patterning, etching, and ion beam infusion, to transfer wafers and keep the space around the wafers clean. 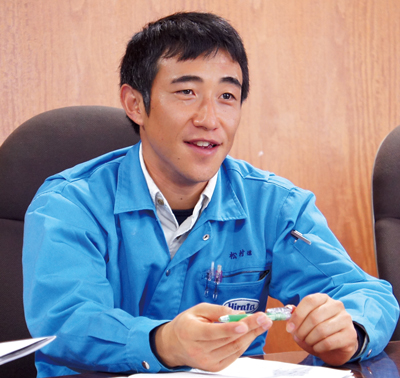 Presentation of the Density Distribution of N2 to Clients

Hirata Corporation conducted flow analyses to investigate nitrogen dispersion within the EFEM. To avoid oxidization of the wafers, the EFEM is equipped with a nitrogen purge function to fill up the FOUP interior with nitrogen. A large amount of nitrogen leakage to the surrounding environment can be harmful to human operators. Consequently Hirata Corporation found that one of the first questions a client had early in the buying process was the amount of possible nitrogen leakage. At the same time, Hirata Corporation engineers were eager to understand how effectively the nitrogen could be distributed within the EFEM by positioning sensors at the ideal spots.

The EFEM is 2 m in width and length. The depth is 1 m. The nitrogen enters through 20 mm diameter holes. With holes this size, the computation domain dimensions are two orders of magnitude greater than the holes. This means a high mesh density will be needed near the holes to properly resolve the jet dynamics. Hirata Corporation engineers successfully identified the ideal size of the mesh elements after consulting with Cradle support engineers. Moving objects in the model were output in Nastran format and imported to the scSTREAM pre-processor. Approximately 7 million mesh elements were needed to properly represent the EFEM which contained several hundred components.

Hirata Corporation engineers conducted analyses of the FOUP to determine how the nitrogen would disperse from two outlets in the lower section during the purge process. They also wanted to know how the dispersion changed as the carrier device moved horizontally and vertically (Figure 2). Hirata Corporation believes that this assessment and the visualization results were crucial for helping them demonstrate the effectiveness of the equipment and to ultimately secure the sale.

Diversifying the Application of scSTREAM

With the success of the EFEM and FOUP analyses, Hirata Corporation now uses scSTREAM for development of many of its other products. Another product is the FFU (Fan Filter Unit), which is designed to permit clean air to move downward. This produces less blockage while keeping the inner pressure 3-5 Pa higher than the surroundings and maintaining a flow velocity between 0.3 to 0.5 m/s. Hirata Corporation used scSTREAM to identify the ideal geometry and allocation of the holes. They also performed simulations of the FFU for the carrier devices used for glass circuit boards.

Using scSTREAM led to cost reductions and shorter development time. The visualization results have also proved effective for both internal and client presentations. Hirata Corporation expects to apply scSTREAM during development of more and more products. 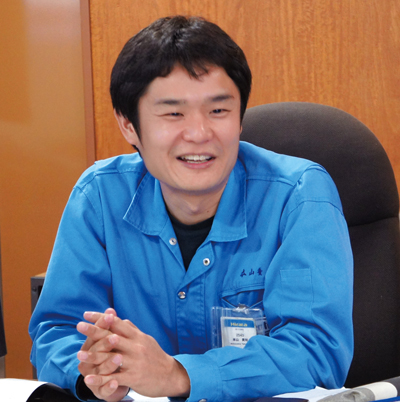 Hirata Corporation engineers highly regard the quality and speed of Cradle support. Responses to inquiries were within one day. Mr. Motoyama says that it was much faster than the other tool developed by an international CFD software firm outside Japan. The complicated inquiries are first submitted to the agencies, which are then forwarded to the developer. In the end, it took two to three days to receive a response. “As we are a manufacturer based in Japan, using the software developed in Japan meant greater benefit. Their support helped us tremendously when we first started using the software. Back then we tried to start with very complicated analyses that involved moving objects even though we had very little understanding of the software. Thanks to the support Cradle engineers provided, we could learn how to make the most of the software,” says Mr. Motoyama.

Mr. Motoyama attended scSTREAM seminars organized by Cradle. “I remember that the Cradle sales engineer suggested I take the examination for the Certificate for Computational Mechanics Engineers. That inspired my motivation in learning about CFD (Computational Fluid Dynamics),” recalls Mr. Motoyama. He studied CFD theory using the Cradle software user guide and various papers. This also helped him better understand what the software could and could not do. Mr. Motoyama says: “I needed to acquire the ability to judge the results correctly, so I revisited the basics of CFD and fluid engineering.” Although he covered the fundamental topics of CFD in college, he says that he was much more focused after being assigned to analysis team at Hirata Corporation.

Hirata Corporation has made steady progress in incorporating scSTREAM into their product development processes. And they expect to extend the range of applications even further in the future.

*All product and service names mentioned are registered trademarks or trademarks of their respective companies.
*Contents and specifications of products are as of December 1, 2014 (partially revised in March 2018) and subject to change without notice. We shall not be held liable for any errors in figures and pictures, or any typographical errors.